David Moyes was shopping in Manchester with his wife Pamela on May 1, 2013. His Everton side were fifth in the Premier League with three matches of the season to go. The Moyeses were getting a strap adjusted on a watch Pamela had bought David for his 50th birthday a week earlier when he received a call from Sir Alex Ferguson.

His Manchester United counterpart and fellow Scot asked Moyes to come to his house in Wilmslow, 30 minutes south of the city centre.

That is where Moyes ended up shortly afterwards on that Wednesday, to be told Ferguson was retiring at season’s end and that Hey was going to take over from him as manager of United, who had just won the English title for a record 20th time.

The pair discussed the club and the team, talking about players individually, the academy, the personnel involved and recruitment. It was in that first meeting that Ferguson said to Moyes: “We quite like Cesc Fabregas.”

Ferguson knew a 17-year-old Fabregas was the one said to have thrown a pizza at him after the tempestuous game at Old Trafford in 2004 which ended Arsenal’s 49-game unbeaten run. But Ferguson thought the Spaniard had long been Arsenal’s key player; one who had the ability to receive the ball with his back to goal, twist a pass around the corner then run to get it back. He also felt Fabregas was an even better player away from home.

Moyes really liked the player, but he had a lot to process.

He had only gone out that day to get his watch fixed, and ended up being told he was going to manage Manchester United and that the club wanted to sign Fabregas for him.

Moyes was the Everton manager at the time, of course, he had a season to finish and a contract in place but, behind the scenes, United and their new executive vice-chairman Ed Woodward began to make inquiries about Fabregas. Their understanding was firm: the player was struggling to be picked for big games back in his native Catalonia with Barcelona and wanted out.

Fabregas had been starting almost every match for Barcelona, ​​the boyhood club he rejoined from Arsenal in 2011, but was an unused substitute at Real Madrid that March. He had also been kept on the bench against AC Milan the previous month as Barcelona overturned a 2-0 deficit from the San Siro to reach the Champions League’s last eight, as well as during the semi-final first leg away to Bayern Munich on April 23, which Barcelona lost 4-0. He played as a forward in the dead-rubber second leg a week later when Lionel Messi wasn’t fit. Barcelona lost that one 3-0.

Barcelona won the league that season under Tito Vilanova but had been mediocre by their own exceptionally high standards and Fabregas was seen as the epitome of that mediocrity. He was a fine footballer who was ultra-professional. But he didn’t shine and he didn’t win big matches.

The grumbles in the Nou Camp’s stands grew. Some traditionalists resented him for going to Arsenal as a teenager and Barcelona having to buy him back for a record fee in 2011. Some unfairly described him as an “English player”, complaining he didn’t make enough of an impact on games or score enough goals, and that he was better amid the action and aggression of the Premier League than trying to play Barcelona’s delicate passing game. Few Catalans now saw him as a long-term replacement for Xavi, the original plan when he was re-signed.

Yet Fabregas still played 3,253 minutes that season. He scored 14 goals and provided the assist on 13 more. Hey was important, but 11 other players got more minutes than him. He was their twelfth man.

Nevertheless, the football department at Barcelona wanted to keep Fabregas. Club president Sandro Rosell would have sold him but Vilanova’s successor Tata Martino liked him too.

The player didn’t appear to want to leave Barcelona, ​​either. He was playing for his hometown club, he was happy with his partner and their child, living close to family and friends and playing with some of his best mates. He rented a house off one Gerard Pique, while he had his own place by the Mediterranean redeveloped.

Woodward, meanwhile, was new to the job over in Manchester.

United had previously conducted transfers in a cloak and dagger manner, with Ferguson and chairman David Gill delighted that nobody had a sniff of the signings of Anderson, Nani and Phil Jones, for example, until they were done.

But this time, United were adamant they wanted Fabregas. He could play in two midfield positions, or as a centre-forward. He was the perfect box-to-box player they needed.

Moyes saw Michael Carrick and Tom Cleverley as the only two natural central midfielders in the squad, with the option of using Ryan Giggs there on occasion. He felt United needed two more midfielders: ideally, those would be Fabregas and Marouane Fellaini, who had done so well for him at Everton.

Fellaini would be needed in the more physically tough games but Fabregas was a midfielder for any occasion and United were prepared to pay good money for a player who had cost €34 million (£29.2 million) when moving from Arsenal two years earlier. 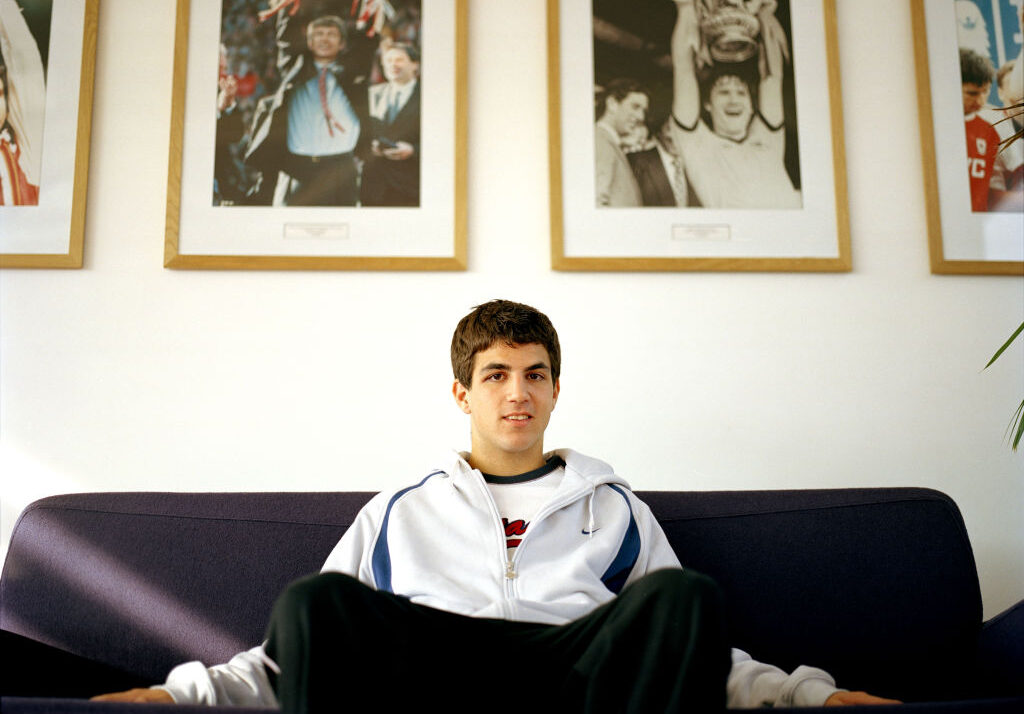 Fabregas qualified as a homegrown player in the Premier League after joining Arsenal in 2003 (Photo: Stuart MacFarlane/Arsenal FC via Getty Images)

Moyes spoke to Fabregas twice that summer. He outlined why he wanted him, explaining that he was the No 1 target for the English champions. The Catalan listened intently. He seemed enthusiastic and explained how he saw the situation at the Nou Camp Nou, but Barcelona were divided on him internally.

United received stacks of intelligence, including from their own players.

On August 1, Moyes drove from Manchester to Swansea to see the Welsh side play Malmo of Sweden in a Europa League qualifier. Swansea would be United’s first Premier League opponents under him two weeks later. Stopping at Gloucester Services on the M5, roughly halfway on the four-hour journey, he spoke to Fabregas for the second time.

Fabregas told Moyes that if he didn’t start in Barcelona’s first league game of the season, he would leave to join United.

On August 6, as United’s players took part in a friendly in Stockholm, the club contacted Rosell. Another bid went in, but Barcelona were not short of cash back then.

Barcelona’s first game was at home to Levante on August 18. It would be tight for United but the transfer window still had 12 days to run.

Fabregas was in the XI and had two assists in a 7-0 stroll. When Moyes heard he’d started, he felt like that whole move was dead in the water. He was crestfallen.

Fellaini instead arrived in the final minutes of a poor, panicked, transfer window for United.

Fabregas played 2,855 minutes for Barcelona that season, more than Xavi or Iniesta, but in April 2014, with Barcelona again out of the Champions League at the quarter-final stage, they decided to sell Fabregas that summer if a substantial offer came in. They denied that, but leading clubs knew he was available.

In the final game of that season, Fabregas and his team-mates were booed off the pitch after they had lost the title to Atletico Madrid, who had also knocked them out of Europe.

United, though, were once bitten, twice shy. The club also had a new manager, after sacking Moyes in the April, just 10 months into his reign. Louis van Gaal didn’t show the same level of interest.

Fabregas instead returned to England with Chelsea, where he stayed for five years, winning the title twice, the 2017-18 FA Cup final, against Manchester United, and a Europa League.