As soon as the club football season comes to an end, everyone’s attention quickly turns to the upcoming transfer window.

The summer market allows managers to sign new players and to sell those members of the squad they deem to be surplus to requirements based on the previous campaign.

Supporters eagerly anticipate the business their beloved team will complete, while senior figures at clubs spend their time poring over the finances related to a purchase or sale.

But how does the transfer window actually work, and how does players moving teams in football differ from how it happens in other sports across the globe?

The Athletic has answered those questions and more…

What is the transfer window?

A transfer window allows football clubs to buy and sell players during set period of times each year.

The main one happens over the summer, at the end of the club season in most European nations, and normally lasts for around two and a half months. Windows normally open in June and close just before the following campaign begins or early in it. Premier League clubs voted to ensure it closed before a game of the next season was played in 2018 but then reversed that decision in 2020.

There is also a winter window, beginning at the start of January, which lasts a month.

The summer period for player trading tends to be when clubs make strategic signings, whereas the nature of January, around the midpoint of many clubs’ seasons, means it has a more reactive element to it.

For example, teams normally make winter-window signings to replace injured players, to try to get themselves out of a relegation scrap or to capitalize on a good start and push on for a higher league finish and/or trophies.

When does it open and close?

The Premier League’s summer transfer window will open this year on Friday, June 10 and close at 11pm on Thursday, September 1.


The summer transfer window is yet to open but Manchester City have already announced a deal to sign Borussia Dortmund’s Erling Haaland (Photo: Alexandre Simoes/Borussia Dortmund via Getty Images)

Does this mean no transfers happen until then?

Clubs can agree on transfers earlier than June 10 but they will not become official — and the player involved will not be able to join his new side — until the window opens.

Players who find themselves out of work can sign for a club at any point of the year, while special dispensation can be given to clubs if they need to acquire a player on an emergency basis.

Common examples of this are when their senior goalkeepers are injured and a new one is needed. It happened at Southampton in December, when Alex McCarthy and Fraser Forster were both sidelined, allowing unattached former Chelsea keeper Willy Caballero to join before January.

On a basic level, how does a transfer fee work?

As the selling club owns the player’s contracted playing rights, it is down to the buying club to negotiate a fee to purchase those playing rights.

What are the stages of a transfer?

Although talks are likely to have taken place between clubs and intermediaries long before any move is completed, the first step that gets the ball rolling is the buying team agreeing a fee with the selling club.

Once that has happened, the player is granted permission to speak to the buying club to sort out personal terms and, if that gets done, undergo a medical. When both of those boxes are ticked, the transfer is usually confirmed by both teams.

When do clubs start negotiating deals?

Football clubs are normally in talks with agents and other intermediaries throughout the year, lining up potential targets.

Those initial conversations — ones with the following summer in mind — tend to start taking place in September and October, before everyone’s attention switches to the looming winter window in November and December.

Once January is out of the way, focus reverts to the summer. But it is not until the end of the European season, in May or early June, that the months of planning and talks come to fruition.

This was evident in Manchester City recently activating a release clause in Norwegian striker Erling Haaland’s contract at German club Borussia Dortmund. That was the result of several months’ worth of discussions with the player and his representatives.

How does this compare to the system in other sports?

America’s National Football League (NFL) and National Basketball Association (NBA), for example, have a different system from what we are used to in football.

For starters, there are no transfer fees when players change clubs in the NFL and NBA, but teams can offer picks in the annual draft of players graduating from the college-level feeder system, which there is no equivalent for in football with its pyramid system of divisions, as payment if they want to sign a player who is contracted to another franchise. Swap-deals, rare in football, are common with clubs trading one player for another of similar quality, for several lesser players or for a package of player(s) and draft picks.

There is a free-agent market, like in football, that allows teams to sign out-of-contract players once the season ends, but teams are not allowed to execute such deals until March in the NFL’s case, after the Super Bowl in mid -February, and the NBA finals in June.

How does the transfer system differ in MLS?

For teams in MLS to get most non-MLS players, the player concerned must be on the team’s “Discovery List”. If the player has already been listed by another MLS club, the interested team must pay the other $50,000 in general allocation money (GAM) — an intra-MLS transaction fund — to acquire him.

A player’s transfer/loan fee is added to wages to determine its impact on a team’s league-imposed salary budget ($4.9 million in 2022). There are numerous mechanisms through which teams can spend far above their budget, with the designated player rule being the most well-known.

Do players have no say over their futures?

As their signature is required on the contract, players ultimately have the final world on who they want to play for.

Clubs work closely with intermediaries when selling or buying players, and if everyone has done their job correctly, the player should not be surprised with their destination.

If an agent, for example, has several clubs interested in a client, then they would go through each one together and discuss which option is the best move, how much the teams are willing to pay and other factors they deem worth considering. 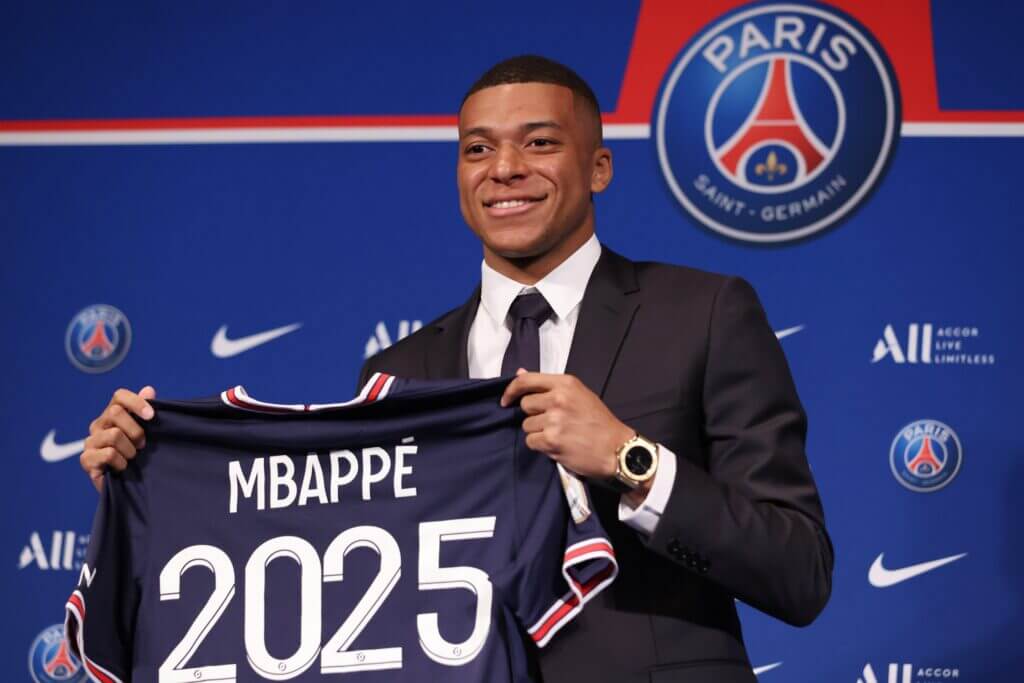 Kylian Mbappe has signed a new contract with Paris Saint-Germain rather than leaving this summer as a free agent (Photo: Gao Jing/Xinhua via Getty Images)

What are the standout possible transfers of the summer?

Haaland has already completed his move to Premier League champions City and fellow striker Kylian Mbappe opted to remain at Paris Saint-Germain as opposed to joining Real Madrid, a move which was widely anticipated, as a free agent when his PSG contract expired this summer.

It will be difficult for those two deals to be beaten over the coming months, but the free agent market is thriving and possibly at its strongest point to date as it allows players to demand hefty signing-on fees due to there being no transfer fee involved in acquiring them.

Manchester United’s Paul Pogba, Barcelona’s Ousmane Dembele, Real Madrid’s Gareth Bale, Juventus’ Paulo Dybala and Atletico Madrid’s Luis Suarez are all out of contract this summer and will be searching for new teams.

One developing situation to keep an eye on is Barcelona’s pursuit of Bayern Munich’s star striker Robert Lewandowski. The Poland international is said to want to join the Catalan club, but Bayern are reluctant to sell.

Lewandowski has now confirmed he wants to leave Bayern this summer. His contract expires after next season, so Bayern must choose between selling now and using that money to buy a replacement, and potentially losing one of the modern game’s best players for nothing this time next year.

Is this system used across world football?

The exact timings of these, however, are set by the individual countries’ football associations, with not all domestic seasons running to the same calendar.

For example, the Premier League’s winter window closed this year on January 31, whereas the one in Turkey’s Super Lig remained open until February 8.

That means Turkish clubs could potentially buy players from England’s top flight during that week when Premier League sides would have been unable to bring in replacement as the window had already shut.