DENVER—The adjustments are coming. The bounce-back kings have two off-days to tweak the game plan.

Game 1 required overtime, but let’s not kid ourselves; the Tampa Bay Lightning were outclassed by the Colorado Avalanche.

That’s OK. They got crushed 5-0 in the opening game of the playoffs by the Toronto Maple Leafs and pummeled 6-2 by the New York Rangers in the Eastern Conference final opener.

I think we know how those two series ended.

Which is not to say the Bolts can go to that well forever and expect to escape time and time again. Especially not when they’re now faced with their most formidable opponent yet, an electrifying Avs team that’s 13-2 in these playoffs.

But it’s a guarantee the adjustments are coming. It’s what Jon Cooper and his excellent Tampa coaching staff are all about.

Don’t expect any panic, either.

They say you earn your bounces, and the Avalanche absolutely deserved to win Game 1.

But the Lightning are a resilient group with championship pedigree, so there’s not going to be any panic after this loss.

Nor should there be, writes @JoeSmithTB.

That’s something that struck me Thursday in a conversation with New York Rangers head coach Gerard Gallant — how he described the Lightning’s demeanor in adjusting after going down 2-0 in their series.

“The biggest thing in our series — obviously they adjusted; probably we surprised them a little bit with the way we were playing — but I just think they were really patient,” Gallant told The Athletic over the phone. “It wasn’t just one line. Their whole team was really patient. That experience from the last two and a half years of winning all those series. That’s a big thing. And Coop made an adjustment with his lines after the second game, you know? They put that checking line. It wasn’t the biggest difference in the series, but they got confidence from it.

“But I just think they were patient.”

Gallant repeated the word “patience” a bunch of times. Imagine being down 2-0 in a series and 2-0 in Game 3 and being the team that’s sitting back being patient, having enough belief in their game — despite those circumstances — to believe you will eventually force their opponents into mistakes.

“They weren’t trying to force it,” continued Gallant. “They weren’t trying to play a shootout game with the talent and skill they have. They didn’t want to play that game with us. They were really patient. We were a young team that made some mistakes. They scored on their power play a little bit, and they took advantage of a few mistakes. But it wasn’t like they were trying to open it up in a wide-open game despite the skill they have. They played a real defensive and safe game, and it paid off for them.”

That’s back-to-back Stanley Cup championship savvy, is what that is. Knowing what kind of game it takes to win, even if it means being ultra-defensive despite having all that offensive skill.

“Confidence, right? They did the same thing to us,” Florida Panthers head coach Andrew Brunette told The Athletic over the phone Thursday. “They sat back. When we played them last year (in the playoffs), and maybe they didn’t quite respect us as much, but it was probably the most entertaining hockey I’ve ever been part of. They played open with us. They kind of got away with it — I thought we outplayed them.

“This year, and part of it maybe was losing (Brayden) Point, but they were totally waiting for us, sitting back, letting us beat ourselves. The patience they had every game … Obviously we let them get ahead in every game which allowed them to be more patient, too. That was key. Because if we could have taken the lead, it might have forced them to open up.”

And that’s exactly what is going to be required now by Tampa Bay. The Bolts need to find a way to slow down and frustrate a high-flying Avs machine that launched 38 shots on goal in Game 1.

Skating up and down the ice and exchanging chances with the Avs isn’t the answer. The Bolts know that. And they may know it because they almost got caught doing that with the Maple Leafs in Round 1.

“In the Toronto series early on, I think they played a little bit more open and tried to match Toronto,” Brunette observed. “And then I think they figured out: ‘Maybe we can’t. We better be more patient. Let’s button it down.’ Which you saw especially in Game 7. Which they then took into our series.”

About that Leafs series. I asked Avs head coach Jared Bednar on Thursday about studying video from Tampa’s three opening playoff series and what they could glean from it all.

“I would say we learned a lot,” he said during his media availability. “I mean, we looked at all their playoff series. That’s where we spent the bulk of our time, going into this. We saw the success that the Rangers had in Game 1 and 2 — also looked at reasons that we felt why they didn’t have so much success as the series went on. Tampa looked like they got stronger and stronger in a bunch of different areas.

“They’re really comfortable playing in those tight-checking games. I think the more controlled, tight-checking game on their side favors them. There’s certain things that we have to do, I think, to be successful, and one of the teams that we looked at closely, and I spent a lot of time on, was the Leafs. It was obviously a great series. It was a dynamic series.”

Why the high level of interest in that series for Bednar?

“I see a lot of similarities in the Leafs’ play, personnel, to ours,” said the Avs head coach. “And some of the things that they do with the puck in their offensive strategy, structure, tactics, whatever you want to call it, there’s a lot of similarities. We learned that from playing against them this year. So they have a lot of success. It’s tough to get that timely goal against (Andrei) Vasilevskiy and Tampa, the way they defend. But they had some really strong pushes … that we looked at really closely.”

Let me take it further than Bednar was willing to. I think he closely watched that first-round series game film for two main reasons:

1) What were the Leafs doing right offensively and in transition that allowed them to score three or more goals per game on Vasilevskiy in the opening six games of that series?

2) What adjustments did Tampa make to win Game 6 and Game 7?

So with that in mind, and knowing how the Bolts swept the NHL’s highest-scoring team in Florida and came back to beat the Rangers, too, the Avalanche understand the team they’re playing against here.

It’s a team that has learned to sacrifice at this time of year.

“They make you earn everything,” young offensive blueliner Bowen Byram said of the Lightning after Game 1. “They do a good job of clogging up the ice. They stay inside the dots, and they defend hard. They have a lot of big D down low that play physical. We just got to keep the puck moving. Keep moving our legs. Make sure we’re getting the puck behind them. And I think our forecheck was really effective tonight, so let’s stick to that.”

Three years ago, the Bolts might have reacted to a Game 1 loss by coming out of their game plan and forcing offense.

That’s not them anymore.

“The evolution of their team and how they were such an offensive team, it’s kind of a learning lesson for us, as I’ve said a few times,” said Brunette. “They’ve turned into not quite the same offensive juggernaut of five years ago or even three years ago, but they’ve learned how to button things down and close things off. What’s remarkable is their resiliency for putting their bodies on the line, blocking shots, doing whatever it takes.”

“We had clips of (Steven) Stamkos blocking three shots in one shift,” added Brunette. “Just them realizing what it took to win and how to win and how they just want it so bad. It makes them extremely tough. And, obviously, they’re still a really talented team.”

“Even though Vasilevskiy played well in our series, he didn’t have to be great because of the way his team played defense and played patient hockey in front of him,” he said. 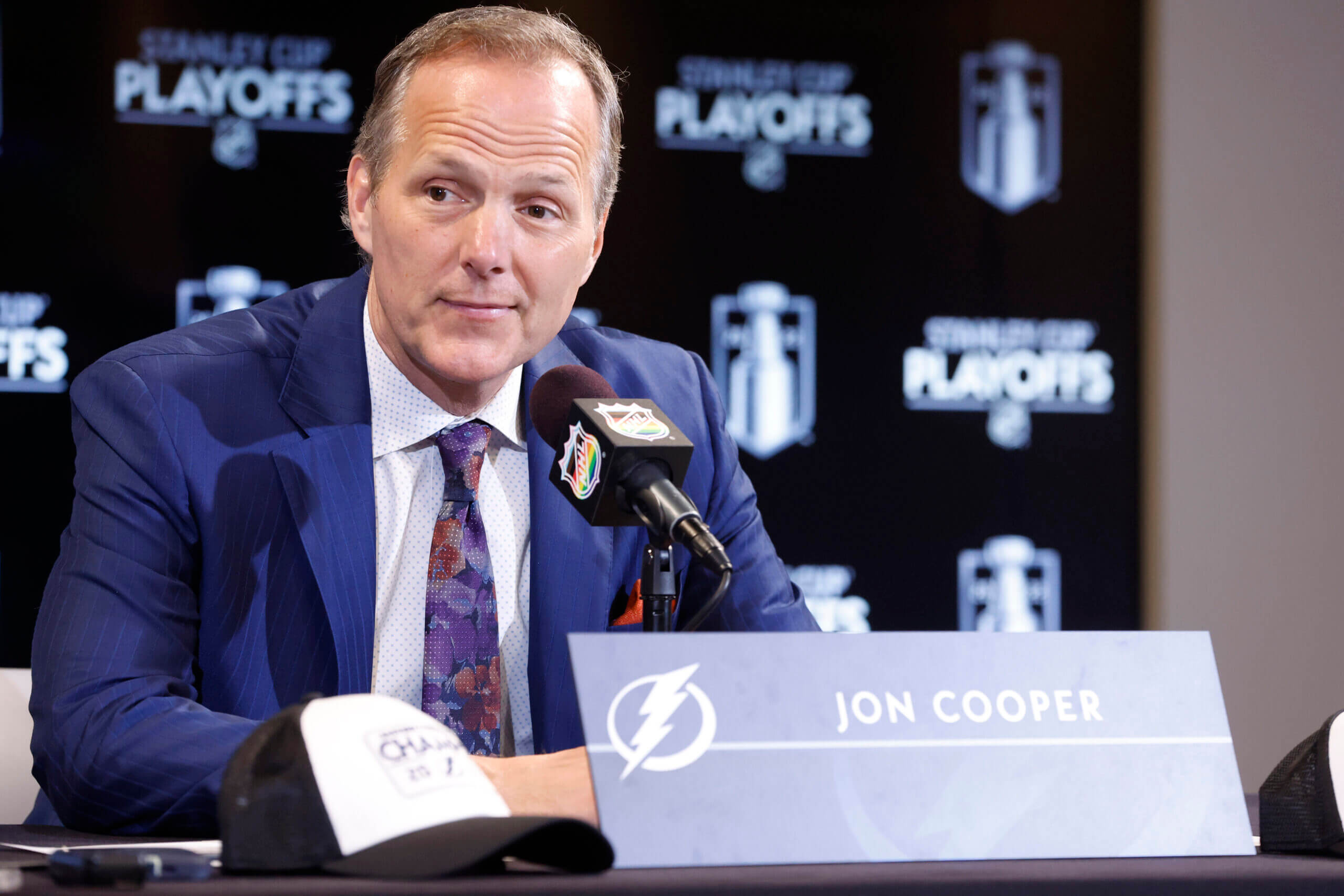 Which is a tip of the cap to Cooper and his adjustments.

“That’s what they can do. He’s a great coach,” Gallant said. “He’s done a great job. You got to give him credit. They make subtle adjustments in a series.”

The adjustments are coming. But the Avs know that.

Buckle up, we’re in for a master class of two excellent head coaches trying to outwit each other.

The next move is yours, Mr. Cooper.