True to his distinctive nickname, Scrap Iron’s teams had to scratch and claw for wins in an era when the Milwaukee Brewers did not boast considerable star power. But starting with a memorable first year, Phil Garner nevertheless left an indelible mark on Brewers history, including more wins than any other manager before him.

His mark of 563 wins has stood until now, with current skipper Craig Counsell one win away from matching Garner’s total entering play Friday.

Garner compiled a record of 563-617 during his 7½ seasons overseeing the Brewers, and his only winning season came in his inaugural year, 1992. But the gregarious and fiery former big-leaguer was the perfect shepherd for a Brewers franchise that needed all the pluck it could get.

Garner, then 42, had never managed at any level when the Brewers chose him in late 1991 over former Brewers assistants Tony Muser and Don Baylor, as well as Gene Tenace and Gene Lamont.

“Other than experience, he has every quality you look for in a manager,” Houston general manager Bill Wood said at the time. “He’s an upbeat and happy guy and a good communicator. He has good talent-assessment skills and a good personality, but I’ve seen him be tough when he has to be.”

More:These are milestones Brewers manager Craig Counsell has reached on his way to becoming the franchise’s all-time wins leader

More:The Brewers love playing for manager Craig Counsell. In their own words, here’s why.

Garner wound up taking second in the 1992 American League manager of the year voting, behind Oakland’s Tony La Russa. Led by rookies Pat Listach and Cal Eldred, not to mention veteran stars Paul Molitor, Robin Yount and Jim Gantner, the Brewers stayed in the race for the American League East crown until the penultimate game of the season, finally ceding the playoff spot to the eventual World Series champion Toronto Blue Jays.

With the third-best record in the American League, Milwaukee would have easily made the playoffs in the wild-card era that followed, beginning in 1994.

More:Brewers’ come-from-behind victory against Padres was memorable for many reasons

More:From Class A Wisconsin to the Brewers: minor-league catcher Alex Hall receives the call – and opportunity – of a lifetime

“Says Molitor: ‘The other thing that came into this club that we hadn’t had maybe as much as we should have, was that we were never timid or intimidated.

“‘It didn’t matter who we were playing. We felt that we matched up. That’s part of the reflection of Phil. He’s a lot like Jimmy Gantner. He won’t back down from anybody. He’ll meet them head- on, look them in the eyes and say, `Let’s go.’ And that’s kind of the way we did it all year.”

Nicknamed “Scrap Iron” during his 16-year playing career, Garner made three all-star teams, playing for Oakland, Pittsburgh, Houston and then briefly with the Dodgers and Giants. The infielder batted .260 and stole 225 career bases, with a penchant for good health (playing in at least 150 games in eight of his first nine seasons).

He beat 12 for 24 in the 1979 World Series when his Pirates defeated the Baltimore Orioles in seven games.

“I’m not sure if they called me `Scrap Iron’ because I had such a lousy glove that it sounded like metal every time a ground ball got to it,” Garner said with a laugh in late 1991 when he was hired by the Brewers.

“It was said that I was a tough player, kind of like a piece of metal: You could bend him, beat on him, but couldn’t break him.”

The fight with Terry Bevington 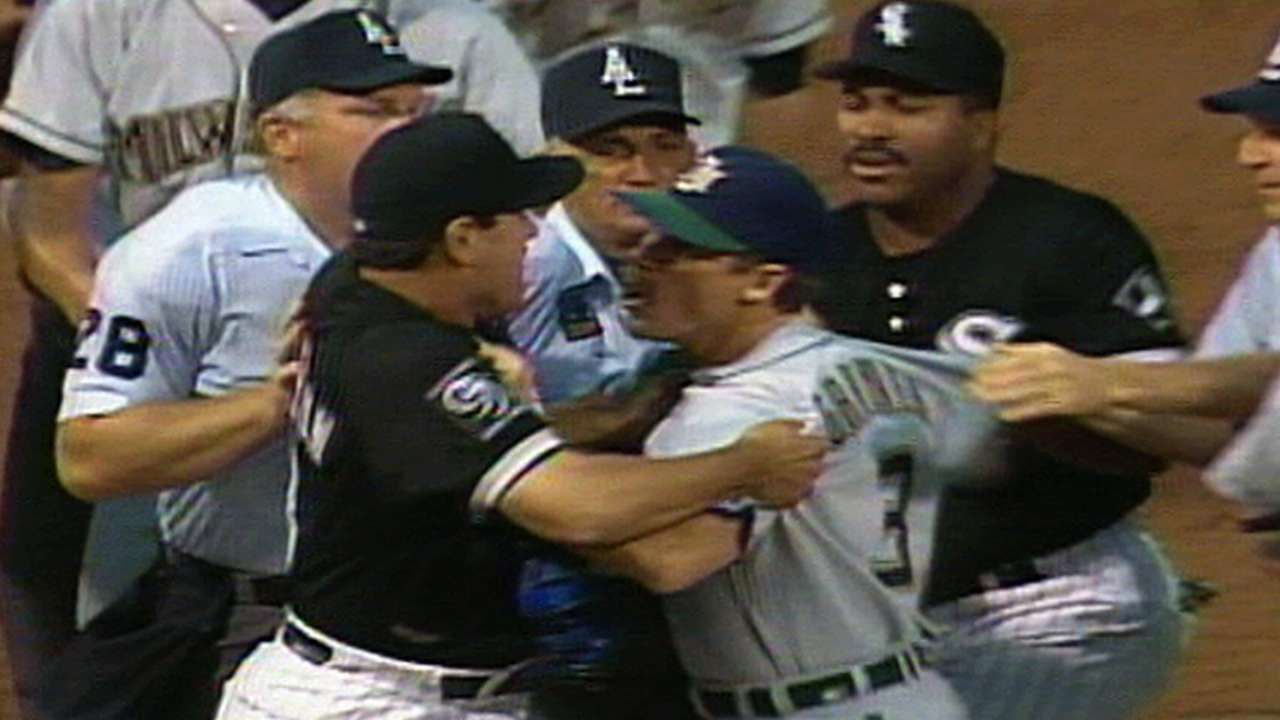 Perhaps the finest example of that tenacity came in one of Garner’s most famous (or infamous?) moments: His fight with White Sox manager Terry Bevington.

On July 22, 1995, Garner and Bevington locked up in a benches-clearing incident in the seventh inning at Comiskey Park, just the most recent chapter in a lengthy history of bad blood between the two. Both managers were ejected (then suspended four games) for their actions, which began when Chicago’s Ozzie Guillen shoved Jeff Cirillo at third base following a close play that resulted in Cirillo stumbling back into Guillen.

“Cirillo hasn’t said ‘boo’ to anybody in two years up here,” Garner said afterwards. “When I got there, Bevington was saying something to (Kevin) Seitzer. I don’t know what it was, good, bad or otherwise. I stepped between them and things escalated from there.”

Garner left the game with a cut above his right cheekbone, joking afterward that he cut himself shaving.

It wasn’t the first time Garner had exchanged words with White Sox staff. In 1993, Garner blasted TV announcer Ken “Hawk” Harrelson for his on-air comments suggesting that Garner advised his pitcher to hit White Sox slugger Frank Thomas. Garner referred to Harrelson and on-air sidekick Tom Paciorek as “idiots” and challenged them to a fight.

“Those two guys have been in the game long enough to know the difference,” Garner said. “The score was 2 to 7 and we’re in the game. We got a man on first with nobody out and two strikes on the hitter and I go out there and tell him to drill him? What’s he thinking about?”

Garner had a heated phone call with Paciorek and declined a call from Harrelson, though the situation was denied by the following April.

“We agreed if we have further disagreements we’ll take it up with each other in private,” Garner said in 1994.

Garner’s tenure in Milwaukee included changes for the franchise, first with a move from the AL East to the newly fashioned AL Central in 1994 and then a move to the National League in 1998. He never got to see the franchise’s relocation into its new Miller Park home, however, when he was relieved of his duties in 1999 with Milwaukee sitting at 52-60; hitting coach Jim Lefebvre took over on an interim basis to close out the season. General manager Sal Bando also departed after that 1999 season.

Garner did get to manage in a new stadium, however, hired by Detroit to manage the Tigers in 2000, the inaugural season in Comerica Park. He was fired six games into the 2002 season, however, then wound up as a midseason replacement as Astros manager in 2004.

In 2005, the Astros upset both the Atlanta Braves and St. Louis Cardinals to reach the World Series, with an 18-inning victory in Game 4 of the division series against Atlanta along the way. The White Sox—there they are again—defeated the Astros in four games, including a 14-inning Game 3 in Houston—the longest World Series game by time in history.

“Garner hoped for better things in Detroit but the Tigers also cut payroll after he got there, also making it impossible to win,” former Milwaukee Journal Sentinel reporter Tom Haudricourt said. “That’s why I was glad when he finally got some talent in Houston and led the Astros to the ’05 World Series, because people finally could see what he could do with some talent to manage. One of my favorite people in baseball.”