Few people still believe that 2-0 is a dangerous lead or that it’s advisable to shoot from distance on a wet surface. But another well-loved cliche of German football has proved much harder to discard: a strong Bayern Munich presence has been seen as key for a strong national team for as far back as the golden ’70s, when club and Nationalmannschaft were largely indistinguishable, jointly dominating European football.

Hansi Flick, himself a former Bayern player and recent manager in Munich, is certainly a believer. A year on from Joachim Low’s overdue swan song, a meek 2-0 defeat against England at Wembley, the national team manager has found form and consistency by putting the house on red. Bar a few exceptions in the problem areas (full-backs and centre-forward) his side are simply Bayern redux. Personnel and system — a hard-pressing 4-2-3-1 — closely resembles the team that won the Champions League in 2020 in devastating fashion with Flick at the helm.

There’s Manuel Neuer in (and out of) goal, of course; Niklas Sule, off to Borussia Dortmund next season, is a guaranteed starter at centre-back; Joshua Kimmich and Leon Goretzka run the midfield, with Thomas Muller roaming ahead of them; Serge Gnabry and Leroy Sane are the wide forwards. In addition, teenage prodigy Jamal Musiala is always among the first wave of substitutes, adding creativity on either flank, in the Muller role or even a bit further back.

In Saturday’s 1-1 draw against Italy in Bologna, Germany started with seven Bayern players for the first time since the 2014 World Cup. Compare and contrast that Bavarian dominance with Low’s marginalization of Munich-based players during the confused shambles of Euro 2020. Only four Bayern men (Neuer, Muller, Goretzka, Kimmich) started in a jumbled-up Wembley XI that featured Mats Hummels (Borussia Dortmund ) and Matthias Ginter (then at Borussia Monchengladbach) in a half-baked, vaguely Atalanta-inspired 3-4-3 system that no one except wing-back Robin Gosens and Chelsea’s Kai Havertz was familiar with from club football.

Low’s inexplicable fascination with that formation left many players in positions so unnatural that they could have featured in the latest Stranger Things series — with equally scary outcomes. Kimmich was horribly miscast as a right wing-back, Havertz withered on the right wing and Muller had far too little room to maneuver on the left side of attack.

Flick’s trick since taking charge in September of last year has been to reinstate as much and as many from the Bayern team he had left a mere three months earlier. Toni Kroos retiring from the national team and the demise of Hummels have paved the way for a full-on Bayern takeover, which was further helped by the superb form of the Munich midfield-forward quintet in the first half of the season under Julian Nagelsmann.

There are some stylistic differences and divergent details but, by and large, Muller et al rarely missed a beat as they went from destroying Barcelona one week to cruising past Armenia next. Against admittedly amenable opposition, this heavily Bavarian-tinged Germany have played well to win back some of the popularity the national team had ceded during Low’s dishevelled final act (2016-2021). Ten games without defeat (eight wins, two draws) have rekindled a good deal of euphoria, to the point of many expecting a serious challenge at the World Cup.

It says a lot about the sustained progress under Flick that a draw away to Italy, Germany’s traditional bogey team, was seen as a huge disappointment on Saturday. “There was a lot I didn’t like,” the national team manager said harshly, “we lacked precision and intensity.” Goalscorer Kimmich was equally critical, saying that his side’s performance was simply “not good enough”. In truth, the visitors’ performance didn’t quite warrant that level of self-flagellation. Approach play and pressing had mostly been on point, especially in a fine opening 30 minutes that had left Roberto Mancini’s reshuffled side little time to breathe. All that was missing was a bit of finesse in the final third — or better shooting from outside the box — to turn Germany’s verve into goals.

And yet, the shortcomings weren’t all that surprising. Flick discovered the logical downside of his concept: a Germany side bursting with Bayern talent has also imported its wholesale problems. All the issues familiar to those who have witnessed the Bundesliga champions’ strange loss of form and cohesion since the winter break were on show at the Renato Dall’Ara Stadium. Goretzka and Kimmich both looked distinctly rusty after missing many weeks with injuries and illness respectively. Gnabry, for all his mazy runs, was largely ineffective in front of goal — much as he has been since the turn of the year. He’s only scored six goals for Bayern in 2022.

His partner on the opposite flank, Sane, has lost his way in much worse fashion. After making a superb start under Nagelsmann, the former Manchester City winger’s recent showing have lacked seriousness and focus once more. In Bologna, the 26-year-old couldn’t be faulted for effort out of possession but his work on the ball was poor throughout. Muller, too, seemingly hasn’t recovered from his club team’s slump. He often found the right space but seldom the right pass or finish. 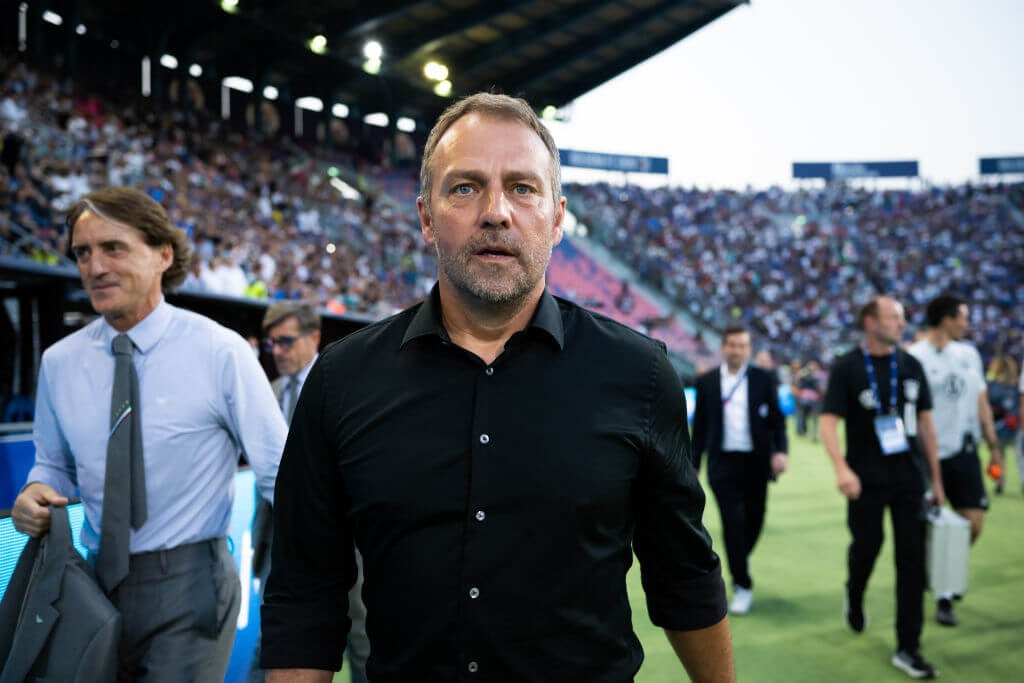 Flick felt much needed to improve after the draw in Italy (Photo: Marvin Ibo Guengoer/GES Sportfoto via Getty Images)

The Bayern contingent’s struggles were made worse by Germany’s traditional worries in certain areas. Jonas Hofmann (Borussia Monchengladbach) and Thilo Kehrer (Paris Saint-Germain) offered little going forward. In Kehrer’s defence, his main job was to tuck in as Gnabry assumed a high position, but the lack of dynamism from the full-backs is a major concern as far as the World Cup is concerned. Newcomers like David Raum (Hoffenheim) don’t have much time to prove their credentials.

Up front, there’s a big, Robert Lewandowski-shaped hole. Timo Werner tried hard enough to make up for the Polish striker’s regrettable ineligibility, but the Chelsea forward is never happiest leading the line against a fairly deep defensive block. Lukas Nmecha (Wolfsburg) is a more orthodox, if less gifted, target man, while future BVB forward Karim Adeyemi thrives on transition. Germany will have to find different solutions up front, perhaps like Bayern will have to in a post-Lewy world.

Having made himself a hostage to Bayern’s fortunes, Flick must hope that his successor at Allianz Arena will conjure up the same kind of perfect attacking storm he did last year at the same stage of the season in time for the plane to leave for the World Cup . In light of Bayern’s almost monopoly of international-class talent in the Bundesliga, the benefits of sticking with the Munich blueprint and staff still clearly outweighs the risks, the knock-on effects of domestic troubles notwithstanding.

Even a Germany side that fails to quite come together, as they did in Bologna, has the hallmarks of a decent Champions League quarter-finalist team; a well-drilled unit, able to play in recognizable patterns. It might not be all that much, but it’s still a lot more than can be said for most sides they will face in the World Cup. In international football, primarily a contest between sides with various degrees of shortcomings, Flick’s club team approach has a decent chance of proving the old adage about Bayern and Germany true once more.