There is a whispered theory among Arsenal fans that the club’s No 9 shirt may be cursed. It’s easy to see why: although it has been worn by memorable figures including Malcolm Macdonald, Charlie Nicholas and Alan Smith, its recent history is checked at best.

Since Nicolas Anelka left under a cloud in 1999, the shirt has been the possession of Davor Suker, Francis Jeffers, Jose Antonio Reyes, Julio Baptista, Eduardo, Park Chu-young, Lukas Podolski, Lucas Perez and, most recently, Alexandre Lacazette. It is a list that includes two club-record signings, a Brazil international, a World Cup winner, an England Under-21 record goalscorer, and the recipient of a World Cup golden boot. And yet it is a group of players who, for a variety of different reasons, largely underwhelmed for Arsenal.

Since arriving from French club Lyon for a fee in the region of £50 million five years ago, Lacazette has fought gamely to rid the No 9 shirt of its hex.

But despite a creditable record of 71 goals in 206 appearances, it is difficult to conclude that he managed it.

There were high points.

He helped Arsenal to FA Cup final victory in 2020, and was named the club’s player of the year the previous season. He finished as top goalscorer in 2017-18 and 2020-21, and has a back catalog that includes a memorable late equalizer against Liverpool and the crucial strike in a 4-2 derby win over Tottenham. He spent much of the second half of last season as club captain.

This, however, is about expectation. Lacazette cannot be filed alongside the likes of Park and Perez — strikers who were bought as squad players, and proved themselves to be nothing more than that. The Frenchman was signed for a price that suggested he was intended to be the centre-piece of the Arsenal team. And that never quite came to pass.


Lacazette and Wenger when the striker joined Arsenal in the summer of 2017 (Photo: Stuart MacFarlane/Arsenal FC via Getty Images)

The initial recruitment of Lacazette, then, is worthy of interrogation.

Arsenal and then-manager Arsene Wenger had looked closely at the Frenchman in the summer of 2016, choosing instead to pursue the likes of Jamie Vardy, who had just fired Leicester to a shock title triumph. Arsenal ultimately ended up with Perez — a player Wenger was never convinced about.

The following year, with alternatives thin on the ground, he was persuaded to plump for countryman Lacazette.

In that summer of 2017, some close to Wenger urged him to push to sign Aubameyang from Borussia Dortmund instead. Ultimately, it was felt that such a deal was beyond Arsenal at that point. Part of the appeal of the Lacazette move was that, while his transfer fee was high, the fact he was arriving from French football meant his salary was relatively affordable.

Things changed in January. The point is often made that signing Lacazette and Aubameyang in successive windows suggested an incoherent strategy. There is definitely an element of truth to that — staff at Arsenal admitted that had they signed Aubameyang first, they would not have also gone for Lacazette.

But it’s also worth considering the context: in the mid-season window in which Aubameyang was bought, Arsenal also lost Alexis Sanchez, Olivier Giroud and Theo Walcott. That’s a huge amount of goals to replace. They needed to act.

There was a plan of spells. The idea, one backed up by Arsenal’s scouting reports, was to field Aubameyang and Lacazette together in a potent front two. Sven Mislintat was instrumental in persuading Aubameyang to join and had always thought of him as someone ideally suited to operating in a striker partnership. When he initially took the Gabon international to Dortmund from Saint-Etienne in 2013, the idea was to field him in a front two.

Despite their apparent on and off-field chemistry, that Aubameyang/Lacazette pairing never quite caught light.

Unai Emery leant on it during Arsenal’s run to the Europa League final in 2019, and Mikel Arteta actually stumbled into using it during the early part of the most recent campaign. It was never the de facto choice, though. By and large, Arsenal have not been a ‘front-two’ team — and their partnership when tried was never so good that it demanded they become one. 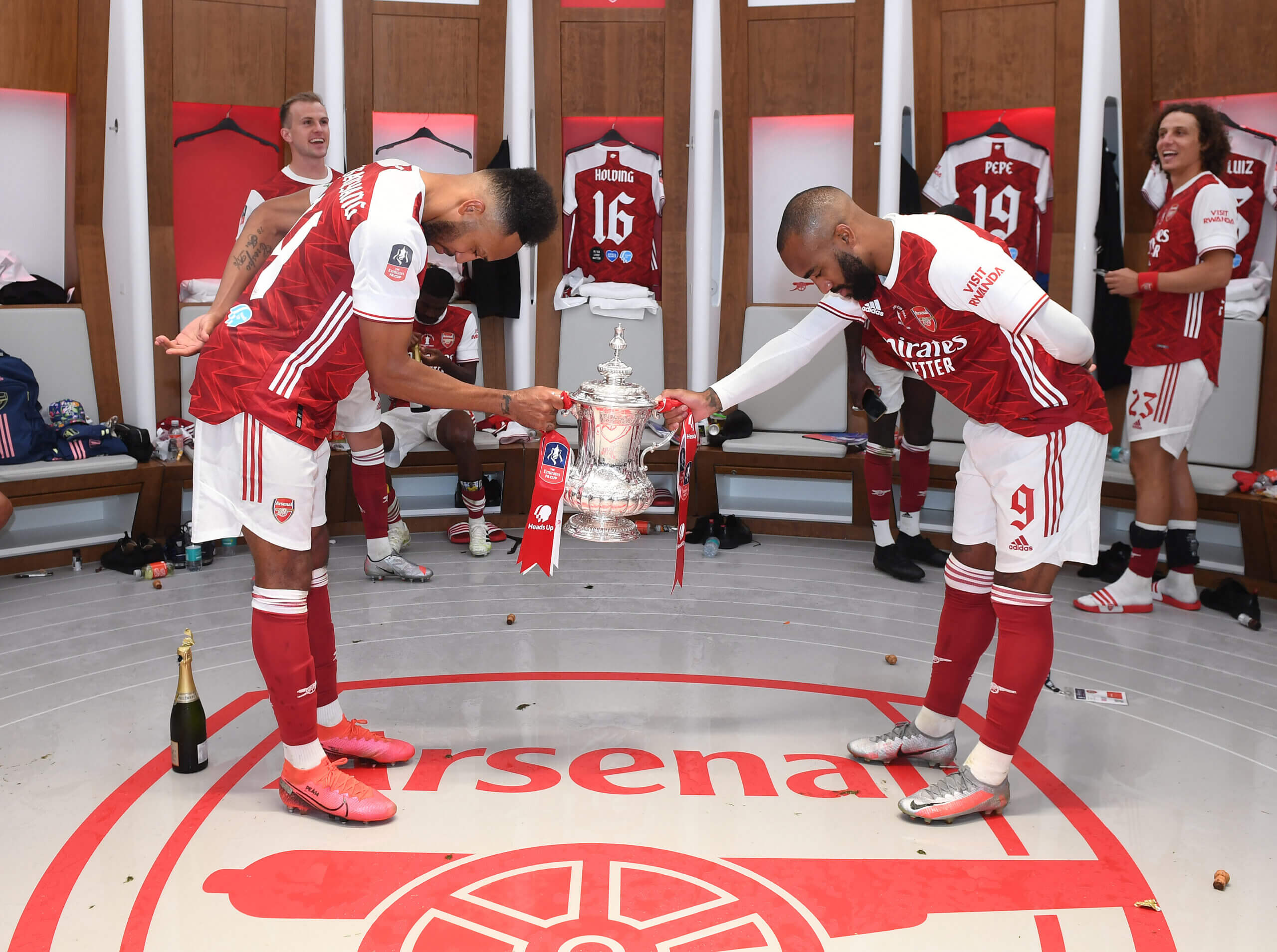 And so Lacazette largely found himself playing one of two roles: either second-fiddle to Aubameyang, or as a foil to facilitate him.

There were other issues in his adaptation: Lacazette has clearly struggled to cope with the speed and intensity of the Premier League. It’s not for the lack of trying — few players make more visible effort — but stamina has been an issue. In the second halves of games, he has tended to fade dramatically. Arsenal fans quickly grew accustomed to seeing his No 9 appearing on the substitutes’ board somewhere between the 60th and 70th minute.

Over time, Lacazette’s style of play has seen him evolve into effectively a ‘false nine’ — someone who drops deep to create overloads in the midfield and link the play.

That has gone hand-in-hand with a decline in his goalscoring progress. His shot map during his time in England shows a reduced volume of shooting from inside the penalty area. 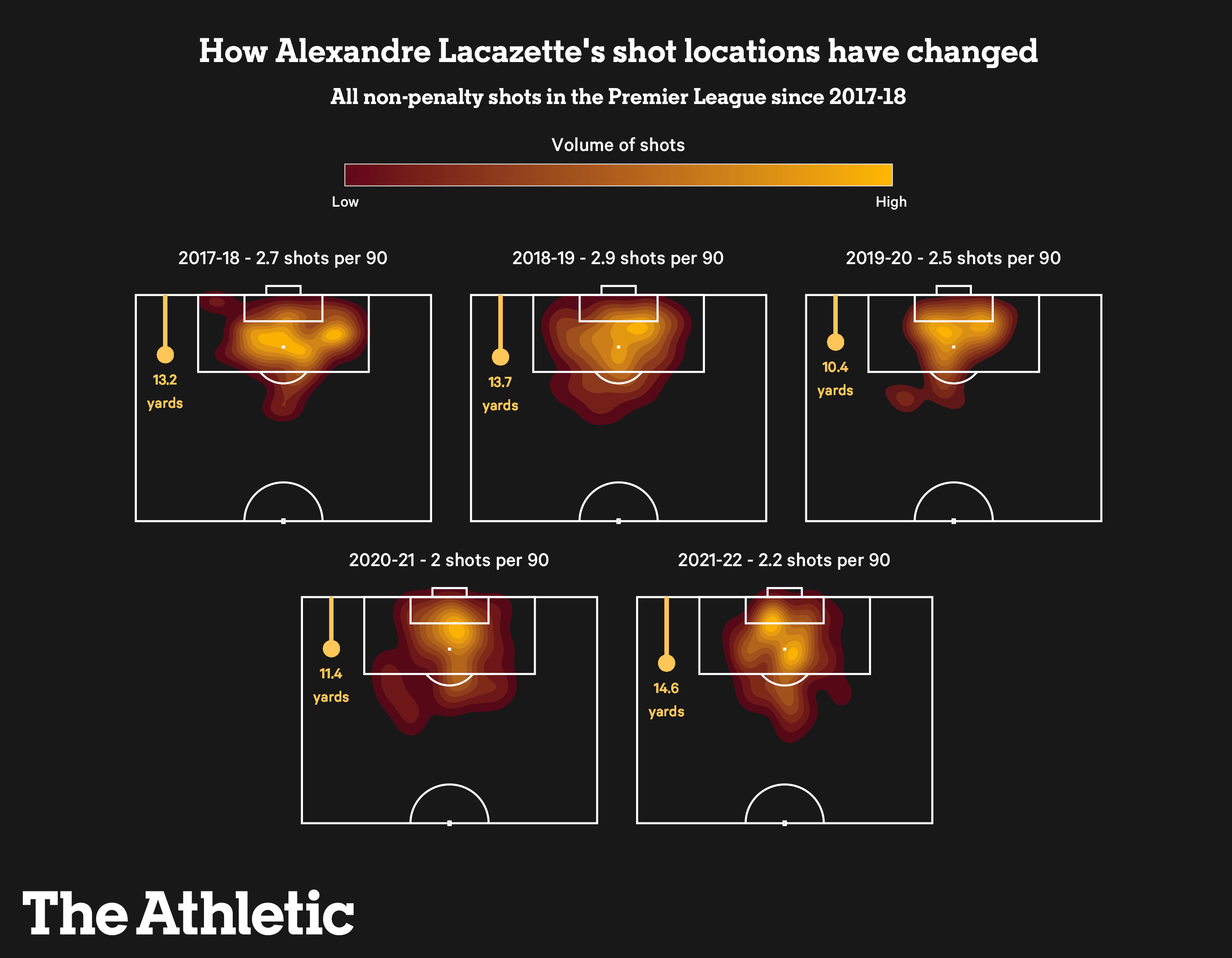 Interestingly, his shots last season have been from a significantly higher average distance — further evidence that he has been operating in a deeper role and that his penalty-box threat is waning.

Last season also saw a substantial drop-off in the quality of his finishing. Typically, Lacazette is reliable in front of the target, tending to fractionally outperform his expected goals number. In 2021-22, however, he has substantially underperformed. 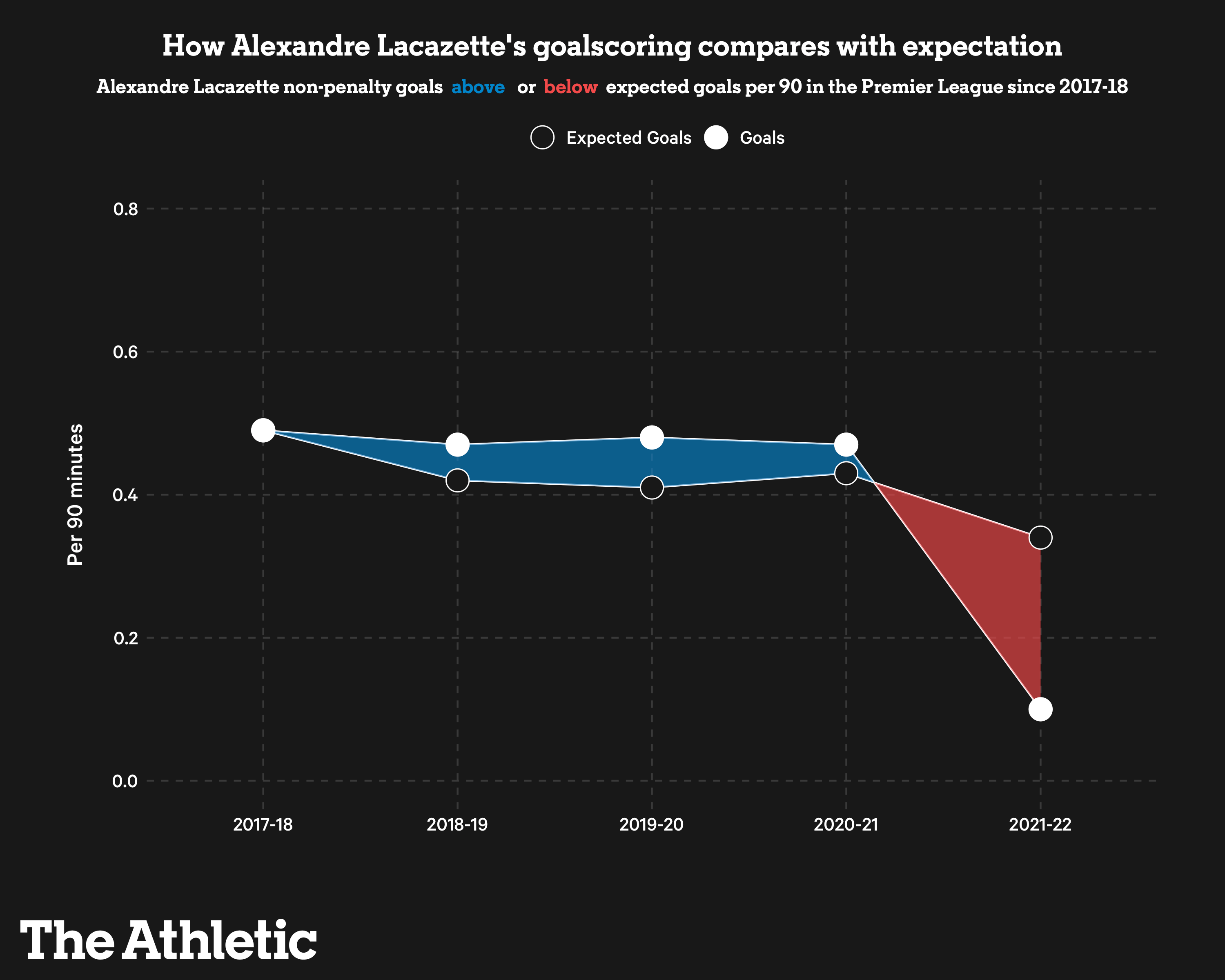 These trends are what will have informed Arsenal’s decision not to renew Lacazette’s contract.

At 31, he will now leave the club. The Athletic understands he is set to join Lyon.

Another aspect in which this deal has ultimately been unsuccessful is that Arsenal were not able to recoup any cash for a player who was once their record signing.

Since Arteta arrived in December 2019, Lacazette has often seemed the closest available match to what the Spaniard wants from a centre-forward, without ever being quite the right fit. This summer, Arteta gets to choose his man.

When the manager was asked in March what he looks for in a striker, his answer was straightforward.

Lacazette will be fondly remembered by staff and players at Arsenal. He was a mentor to younger players, and a motivating force in the dressing room.

As the years went by, he took a greater interest in the club’s community and charitable projects. When letters from supporters arrived for him, he would ask questions about the families who sent them. He bought in. Arteta recognized that. He informed the decision to give him the armband.

But Lacazette’s 30 league appearances in what turned out to be his farewell season saw him score just four goals. Arteta knows that is not enough for a team with ambitions of reaching the Champions League. The greatest difference between Arsenal, who finished fifth, and Tottenham, who earned two points more than them to make the top four, in 2021-22 has ultimately been the quality of their respective centre-forwards.

It’s strange to think that when Lacazette arrived he was heralded as a radical alternative to Giroud.

Arsenal fans had grown frustrated with his fellow Frenchman’s lack of speed and inability to run in behind. And yet, it soon became clear that ultimately Lacazette’s strengths and weaknesses were not that different from those of his compatriot.

Look at how Giroud has performed in the intervening years, and the silverware he has won for club and country, and perhaps Arsenal would have been better off simply sticking with him.