The MLB Trade Deadline is not until August 2nd. However, with the New York Mets looking as a legit World Series contender, you can already conclude the team will be buyers. One of the most scrutinized area of ​​the team is the bullpen.

As of Saturday, the Mets’ bullpen ranked 10th in ERA, seventh in FIP, and sixth in xFIP. The numbers themselves are not bad at all. As a whole, New York’s bullpen is an above average group. As the numbers show.

However, as has been the case in year’s past, most all World Series teams have elite bullpens with terrific depth. This is something New York is lacking right now. So, what is one name they should be focused on come the deadline? The-37 year-old journeyman, David Robertson.

Robertson, 14 years into his career, is turning in one of his strongest seasons. Through 22 2/3rd innings pitched, he owns an ERA of only 1.59 (four earned runs allowed). His FIP and xERA of 2.21 and 1.94 indicate his results are very much warranted. Robertson has also only allowed 12 hits across his 22 2/3rd innings pitched. He has been terrific.

Robertson has struck out hitters at almost a career-high rate. His 35.6% strikeout rate ranks in the league’s 97th percentile. This largely due to his stuff just being borderline unhittable. He is generating a whiff rate that ranks in the league’s 94th percentile. He relies on three pitches: a cutter, a curveball, and a splitter. Each of which own an xBA (expected batting average) less than .206. His slider has yet to been hit this season and his curveball has a batting average against of only .103. 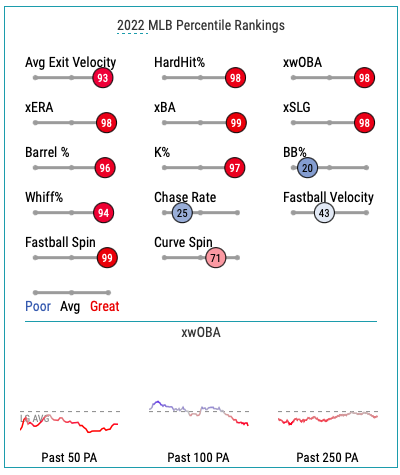 All this has culminated in just a fantastic season. As the above snippet points out, in compared to his peers in several important pitching analytically categories, Robertson has been elite.

The only concern so far for Robertson this season has been occasional walk issues. He has issued 10 walks across his innings of work this season. That 18.2% walk rate ranks in the league’s 20th percentile. Of course, at age 37, the health and fatigue concerns for a guy who has already thrown the most innings he has thrown since 2018 are legit.

The 2009 World Series champion signed a one-year, $3,500,000 contract with the Chicago Cubs in the offseason. So, in acquiring the veteran the Mets would be getting a rental, which is perfectly fine. With that being said, acquiring Robertson should not be terribly expensive.

As mentioned above, there is still plenty of time until the trade deadline so a lot can happen. However, if the Mets want to address their bullpen, which would be wise, targeting Robertson should be at the top of their list. This pending an injury or a steep regression by the Alabama native.