Manchester United have prioritized signing a central midfielder this summer as the club remain in talks with Barcelona to sign Frenkie de Jong.

United have also made initial inquiries to Ajax about winger Anthonywho is also well-known by new boss Erik ten Hag having been a regular in his Ajax team over the past two seasons.

They are also interested in Ajax defender Jurrien Timber.

The 22-year-old is one of a number of United players have been looking at – another was Liverpool-bound Darwin Nunezwho is on the verge of joining the Reds in an £85m deal from Benfica.

What’s the latest on De Jong?

There has been no official offer yet for De Jong from United with the clubs still apart in their valuations of the 25-year-old, but there is a growing belief from all parties a deal can be done.

United, however, will focus on other targets if they cannot negotiate a reasonable price with the Spanish giants.

De Jong is a player Ten Hag knows well and rates highly having managed the Netherlands international at Ajax, where he was part of the side that won the 2018/19 Eredivisie title and reached the Champions League semi-finals.

United are expected to sign at least one midfielder this summer, with Paul Pogba, Nemanja Matic and Juan Mata all departing Old Trafford.

De Jong’s Barca contract runs until the summer of 2026 but the club’s financial problems may mean they are willing to sell this summer.

Another priority for United this summer is a forward who can play across the frontline, but not necessarily an out-and-out number nine.

United have made initial inquiries to Ajax about winger Antony, who is also well-known by Ten Hag having been a regular in his Ajax team over the past two seasons.

The 22-year-old is one of a number of United players have been looking at – as was Liverpool-bound Nunez.

Sky Sports News has been told the Uruguay forward was not a top priority target while United were not interested in doing a deal at the prices being quoted. 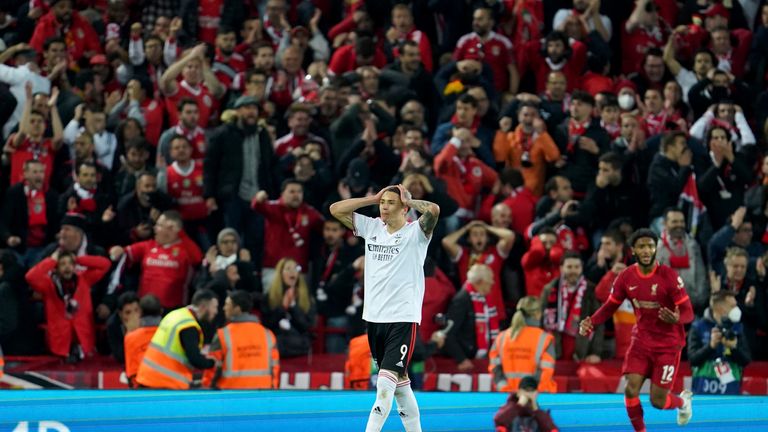 United never made an official offer to the Portuguese side and were not willing to enter a bidding war over the 22-year-old.

Manchester United also remain interested in Ajax defender Jurrien Timber – another player who was a regular under Ten Hag at the Dutch champions.

United are looking at other central defenders too, including Villarreal’s Pau Torres.

But with United well-stocked at centre-back position, it is understood the priority remains recruiting in midfield and attack.

Ten Hag wants to bring in new players this window but also wants to assess his current squad.

Who will be on the move this summer as the transfer window closes at 11pm on September 1?

Keep up-to-date with all the latest transfer news and rumors in our dedicated Transfer Center blog on Sky Sports’ digital platforms. You can also catch up with the ins, outs and analysis on Sky Sports News