David Perron has played for five teams during his 15-year NHL career but has signed a contract with only one: St. Louis.

Will there be another extension for Perron in his adopted hometown?

The 34-year-old forward is one of four players who finished the 2021-22 season on the Blues’ roster and will become unrestricted free agents July 13 if not re-signed by then. The others are goaltender Ville Husso, defenseman Nick Leddy and forward Tyler Bozak.

Before I give you the latest on whether those four could be back with the Blues, let’s review the team’s salary-cap situation for next season, which will give us a clearer picture of what’s possible.

The cap will increase $1 million, to $82.5 million for next season, but the Blues will carry over $1.1 million in bonus overages from 2021-22. According to CapFriendly, they currently have 18 players under contract for 2022-23, with a combined cap hit of $72.4 million, and with the $1.1 million bonus overage, that’s $73.5 million. That leaves them around $9 million in cap space to fill out the roster.

There’s more to it, though, with players on two-way contracts who could be on the NHL roster and a pair of pending restricted free agents. So let’s break it down position by position.

Here are the nine forwards the Blues have on one-way deals next season:

The Blues also have Alexei Toropchenko and Nathan Walker on two-way contracts worth $750,000 next season, which are included in the $73.5 million projected cap hit. Toropchenko is expected to be on the NHL roster, and whether it’s Walker or someone else, that 11th forward spot would currently be filled by a league-minimum salary. The 12th forward could be prospect Jake Neighbours, whose entry-level cap hit is $863,333, which would cut into the Blues’ available cap space.

Here are the five defensemen the Blues have on one-way deals next season:

The Blues also re-signed Calle Rosen a few weeks ago to a two-year, two-way contract worth $1.525 million, and his $750,000 AAV for 2022-23 is currently counting toward the team’s $73.5 million projected hit. He could be on the roster next season, but the Blues do have two players — Niko Mikkola and Scott Perunovich — scheduled to become restricted free agents in July and needing new contracts. Mikkola has arbitration rights; Perunovich does not.

So hypothetically, if the Blues kept seven defensemen on the roster, and that included Mikkola and Perunovich, they’d remove Rosen’s $750,000 and add the combined salaries of Mikkola and Perunovich. Mikkola made $787,500 last season, and with arbitration rights could make a little more. It’s impossible to know what will happen in an arbitration hearing, but with Mikkola’s expanded role, let’s pencil him in for a $1.1 million AAV. It’s even more difficult with Perunovich, whose base salary on his entry-level deal was $925,000 but who has been limited to 19 NHL games because of injuries.

Lastly, the Blues have just one goalie on a one-way deal next season:

So to sum it all up, the team has 18 players on the roster accounting for $73.5 million.

That’s assuming the roster stays status quo, which isn’t likely, but at least that gives us a reference point.

Where does the roster go from there? To get a sense of it, I spoke with a handful of league sources. Here’s what they’re saying about the Blues’ four UFAs.

On June 1, both Perron and Blues general manager Doug Armstrong spoke to the media, and they could not have made their mutual interest in continuing the marriage any clearer.

“Right now, my discussions are between me, Doug and David, and I think they should stay like that,” Allan Walsh, Perron’s agent, told The Athletic. “There really isn’t anything to say publicly other than David has made it very clear that he wants to stay in St. Louis, and I think Doug and (Blues coach) Craig Berube have made it clear that they would love David to remain . So there’s a mutuality of interest on both sides. We’re going to have to see where it goes from there.”

One source with knowledge of the situation (not Walsh or Perron) said that the Blues’ initial offer to Perron was for two years with a salary much lower than he was expecting. That has led to some frustration for a player who has proved several times that he wants to be in St. Louis, re-signing in 2016 after he had been traded to Edmonton and re-signing in 2018 after he had been left unprotected in the Vegas expansion draft.

According to The Athletic’s player cards, Perron’s market value is $8.6 million, which is more than double what he was paid on his last contract ($4 million AAV).

Every summer, Evolving-Hockey projects the next contract for NHL players around the league, and for Perron, it has forecast a three-year contract worth $6.1 million per year.

The Blues may end up going three years with Perron, but Armstrong’s history has shown us that he believes a player’s performance falls off significantly in his mid-30s, so the GM may stick to a two-year offer unless he can get the AAV down to his liking. At this point, though, the proposed AAV on a two-year deal is not to Perron’s liking.

These are, by definition, negotiations, and they will continue.

The 27-year-old Finnish goaltender put himself in a prime position with a 25-win regular season and a .919 save percentage. His postseason wasn’t as impressive, but in the big picture, he’s turned himself into a target for teams.

There have been no discussions between the Blues and Husso’s agent, Todd Diamond, but there is expected to be dialogue before the goalie heads to free agency.

That conversation may not last long, though. Husso’s quality season coupled with a goalie market that’s expected to have a lot of buyers could be the perfect storm for him to get a contract the Blues can’t afford.

According to The Athletic’s player cards, Husso’s market value is $4.1 million. 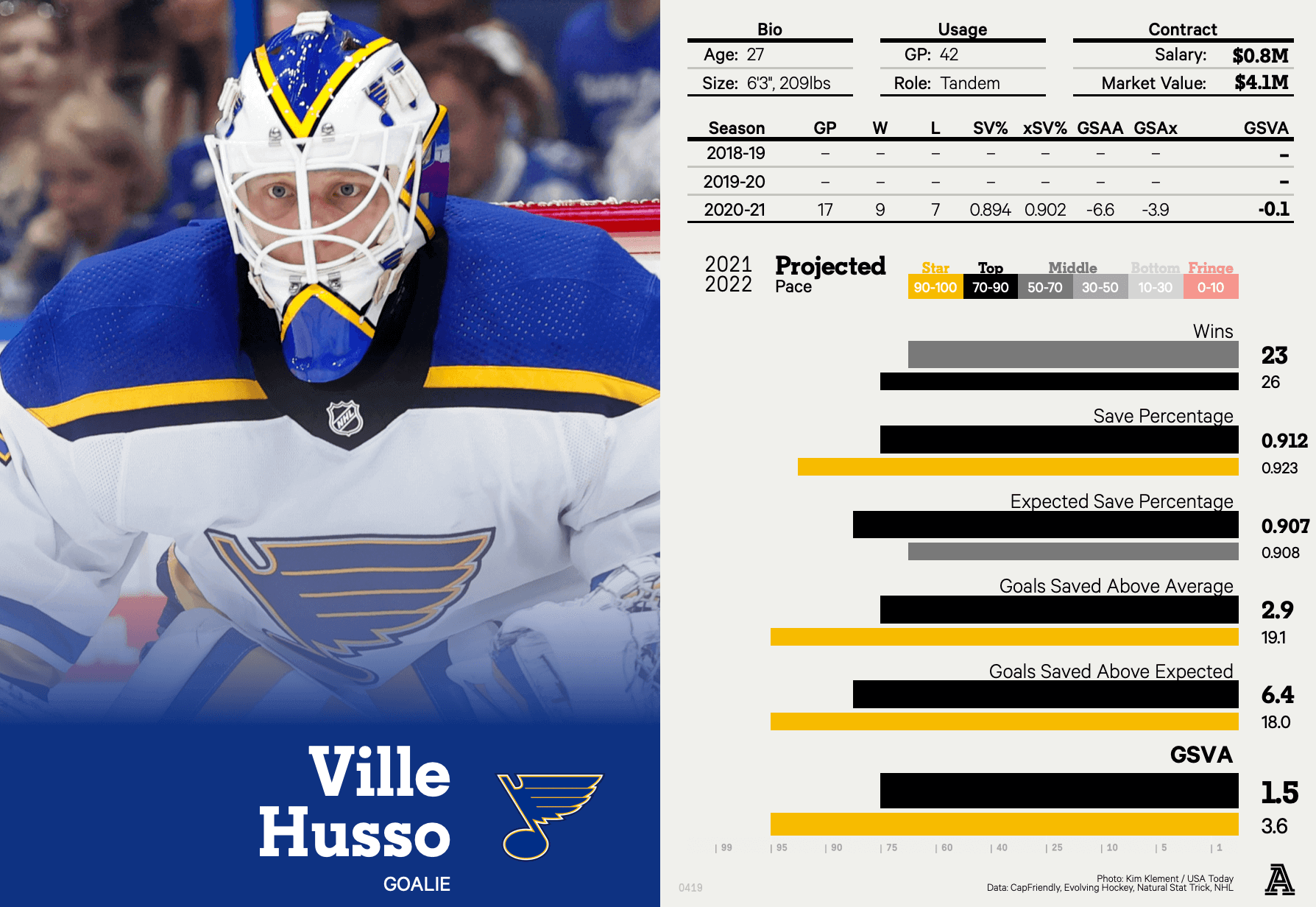 Evolving-Hockey is projecting a four-year contract for Husso worth nearly $5 million per year.

The projected $5 million AAV is in line with what Vancouver’s Thatcher Demko received (five years, $25 million) at age 26 last season and Boston’s Linus Ullmark (four years, $20 million) at 27 last season. Demko had played 72 games at the time of his signing and Ullmark 117. Husso has played 57.

In a goalie market that drops off significantly after Minnesota’s Marc-Andre Fleury and Colorado’s Darcy Kuemper, who could be re-signed by their current clubs, Husso may get a $5 million AAV, and it would be hard for him not to capitalize on that . But even if the offers aren’t quite that high — let’s say $3.5 or $4 million — it’s doubtful the Blues would be willing to commit nearly $10 million, including Jordan Binnington’s $6 million AAV, on the goalie position.

The defenseman was a good fit for the Blues after being acquired in a deal with Detroit at the trade deadline. The Blues expressed interest in bringing him back earlier this month, but there have been no talks to date.

Leddy has career earnings of close to $46 million, according to CapFriendly, so perhaps playing on a Stanley Cup-contending team is a priority for him. But at 31 years old, this also might be his last chance for a sizeable contract.

Leddy is wrapping up a seven-year, $38.5 million contract ($5.5 million AAV), signed with the New York Islanders. He is looking for a four- or five-year contract with at least a $5 million AAV.

According to The Athletic’s player cards, Leddy’s market value is $1.7 million, but that likely reflects his time in Detroit before the trade to St. Louis, where he made more of a difference on a better team. 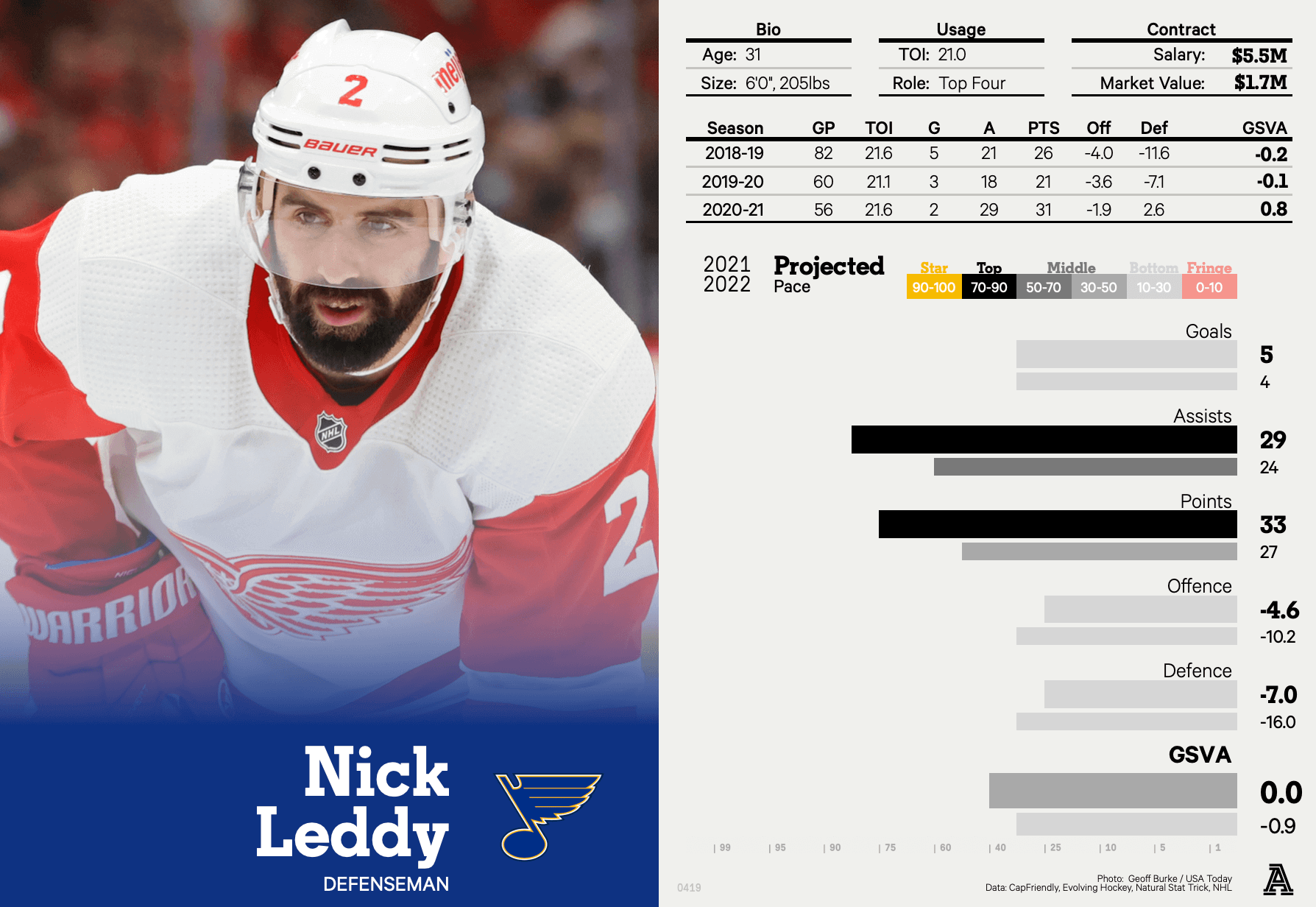 Evolving-Hockey projects a five-year contract for Leddy worth just over $4.9 million per year.

Considering the Blues’ cap constraints and wanting to bring Perron back, re-signing Leddy seems like a long shot unless the defenseman was so comfortable with his situation in St. Louis that he can’t see leaving. But unless something changes elsewhere with the club’s roster, it would have to come with a significant pay cut.

The veteran forward signed a one-year contract worth $750,000 with bonuses last season, which worked out well for him and the Blues. He is interested in returning for a 14th NHL season if he can find the right fit somewhere.

With the emergence of Toropchenko, the one-way deal signed by Logan Brown and the expected arrival of Neighbors, though, it’s unlikely that Bozak will be back in St. Louis. The only way it would be possible is with another bonus-laden contract if the club wants to keep his experienced presence around. But even at that, it seems unlikely.