Things are in a holding pattern as we wait for resolutions to the Kris Letang and Evgeni Malkin contract situations. Today I am going to talk about a very unlikely path to replace Evgeni Malkin if it comes to that point. To repeat, I don’t think it is a likely path. I do think the chances would be slightly above zero and there’s nothing else to talk about so why not?

If for some reason the Penguins do not retain Malkin’s services perhaps they could really lean on Sidney Crosby’s relationship with his Team Canada linemate. This linemate is currently an unrestricted free agent. He is also the reigning Selke Trophy winner. He is one of the best analytical players of all-time. He is also unsure of his future whether it is to retire or to return to the Boston Bruins. The player (and I already told you this isn’t likely) is Patrice Bergeron. Yes, that Patrice Bergeron.

The Bruins just fired Bruce Cassidy and their star winger David Pastrnak is heading into a contract year with visions of making a lot more than he does right now. Brad Marchand is out until at least Christmas time with a hip injury. Charlie McAvoy and Matt Grzelcyk are also slated to miss the beginning of the year as of this moment. Things aren’t looking great at the moment in Boston. They could go from a real contender to pretender pretty quick. They don’t have a lot of cap space and LTIR does them no good when the players out plan on returning. It might not be appealing to Bergeron to come back to a situation with more questions than answers. Bergeron himself is coming off of elbow surgery which he had been managing the past two seasons. It will sideline him 10-12 weeks and he should be ready to go for the season opener, wherever that may be, if he chooses to play.

Here is where Bergeron is with everything

‘I’m 36 and I don’t have a contract’: A stressful time for most is an opportunity for Patrice Bergeron. https://t.co/Ek66OH1DKq

“I still think I have a lot of time in front of me to make that decision,” Bergeron said on Sunday after winning his record-setting fifth Selke Trophy. “I’m going to make sure that I take all that time I need to make the right one.”

“Now I’m 36 and I don’t have a contract,” Bergeron said. “I can actually take a step back for the first time in my career, first time in my life, that I can just reflect on what I do want looking forward for the future. Talk with my family, with my wife. It’s just more of that — the fact that I have that opportunity to do that, take a step back, take some time for myself and really know what I want.”

Coming back to the Bruins or retiring are the two most common outcomes and it isn’t particularly close. If Bergeron were to leave the Bruins I think playing with Sid would be on the radar. They’ve been linemates on Canada since they were both teenagers. The Penguins, while not favorites, are still a team with some potential depending on how they shape the roster. Bergeron wouldn’t have to be a first line center and could fall back into a role tailor made for him as a second line center. He’s been doing a lot of heavy lifting over the years as the #1 guy in Boston. While older he is still an incredibly effective player (duh Selke Trophy). 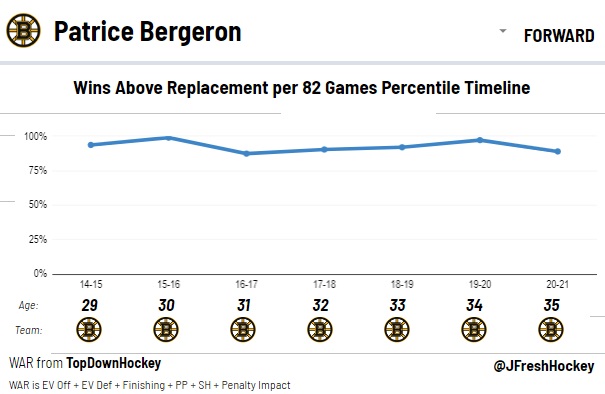 If you’re going to “replace” Malkin you are going to have to get lucky. Vincent Trochek isn’t going to replace him. Nazem Kadri isn’t walking through that door at a cap hit that makes sense relative to what just re-signing Malkin would cost. That’s assuming you can convince either player to sign in the first place. You are going to have to hit on a long shot. Bergeron is certainly a long shot. He would be one of the few things that could actually replace Malkin’s impact. But you could also… you know, just sign Malkin and be done with it.