Mike Minor had his best start of his brief Reds career and kept the Reds in the game despite the early deficit. Brandon Drury got the Reds back in the game with one big swing in the fifth inning. Drury continues his remarkable start to the season with his 12th home run of the season, a 3-run bomb at a distance of 404 feet to tie the game at 4.

Mike Moustakas drove in the go-ahead run with an RBI single in the 6th.

The Reds bullpen, which has struggled to say the least of late, gave one of their best efforts of the season. Tony Santillan, Reiever Sanmartin, Art Warren and Hunter Strickland shut down the Diamondbacks over the final 2.2 innings to preserve a 5-4 victory.

Biggest Play of the Game 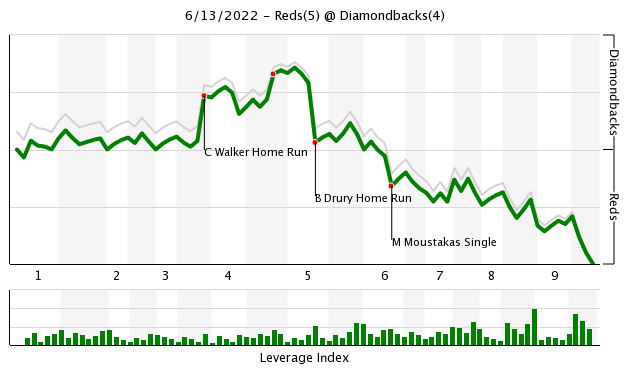 According to Fangraphs WPA statistic (winning percentage added), the biggest play of the game was a 3-run home run by Brandon Drury with 1 out in the 5th inning, tying the game 4.That play increased the Reds probability of winning by 26.0% (from 21.9% to 46.9%).

Brandon Drury just keep on raking. He hit a massive 3-run home run in the 5th inning to tie the game. Drury now has a team best 134 wRC+ on the season. I would love for the Reds to be exploring a short extension for him right now, but you’d have to think he is going to be drawing some serious questions at the trade deadline.

Brandon Drury: Third homer in Reds history that was a tying or go-ahead 3- or 4-run shot in the 5th or later at Chase Field. Ken Griffey Jr and Adam Dunn hit the others in consecutive games on Jul 8-9 2005.https://t.co/uWCPRQXhuP

mike minor gave the Reds his best effort to date. His final line might not look spectacular (6.1 IP, 8 H, 4 ER, 2 BB, 5 K), but two of his earned run were fairly suspect. Matt Reynolds misplayed a weak ground ball that should have been the second out of the inning in the 4th (it was somehow scored a hit). Two runs would end up scoring that inning. All in all, it was a positive start for Minor. I don’t think anyone is expecting him to be spectacular, but he would just be nice if he could give the Reds somewhat quality deep starts like tonight all season.

Nick Senzel reached base three times in what will likely be his last regular day in the leadoff spot with Jonathan India returning. Senzel has had a pretty rough season offensively to this point, but it was nice to see him have a solid night. I would really like to see David Bell move him to #9 in the order. I think he would be a good second time through the order leadoff hitter, and hitting in front of Jonathan India certainly would not hurt.

Reiver Sanmartin made his return to the Reds in a new role, and looked really good. Sanmartin came in relief in the 8th inning with the Reds down a run with 3 straight lefties due up. He got a weak fly-out, strikeout and then gave up a very cheap single before being pulled for Art Warren with a switch-hitter due up. Last year between AA/AAA/MLB, left-handed batters only hit .188/.235/.250 vs Sanmartin. It would be nice to see him be able to nail down a left-handed reliever role for the Reds, something they desperately need. He has a difficult arm slot that could make him effective in short spurts.

Chris Okey recorded his first MLB hit. Those hits will NEVER get old.

Matt Reynolds, as mentioned above, misplayed a ball in the 4th inning that lead to two runs. He did however make a spectacular play later in the game. It’s maybe equally surprising how good he has been at the plate as bad as he has been in the field. I would have thought he would have been much more “sure-handed” with the glove than he has shown so far.

Not so random thoughts…………

It was nice to see Tejay Antone able to join the team this week as he is rehabbing in Arizona, as he was interviewed on the Bally Sports Ohio broadcast. I will be the first to admit that I have often forgot about him. He was so incredible in his role last season that you just have to hope he can be fully healthy for the start of next season. He can completely change the look of an entire bullpen.