The trade deadline outlook will change significantly for many teams in the 50 days between now and Aug. 2. Eight teams appear to be clear sellers, as I wrote in an article a little over a week ago. The next tier, which includes seven teams, could end up as buyers or sellers depending on their play, injuries and other factors over the next seven weeks. Let’s look at what these teams that could go either way at the deadline might do if they ultimately buy or sell, along with my buy/sell prediction for each of them.

The Diamondbacks (29-33) are nine games back in the National League West with a run differential of negative-36, so it’s likely they will again be sellers at the trade deadline. On the other hand, they are only 5 1/2 games back in the NL wild-card race, but I think they’ll end up selling.

If they sell: The Diamondbacks could dangle veteran left fielder David Peralta, who is still a solid-average player. Peralta has eight home runs, 11 doubles and 25 RBIs this season after leading the major leagues with eight triples in 2021. A left-handed bat, Peralta would provide lineup balance and outfield depth for teams such as the Blue Jays, Braves and Brewers. He will turn 35 in August and will be a free agent after this season.

The Diamondbacks have plenty of pitchers they could trade, starting with left-hander Madison Bumgarner, though they’d have to eat most of the $50 million left on his contract through 2024 and even then it would be difficult to find a taker. However, Bumgarner has logged a 3.50 ERA in 13 starts and is one of the best postseason pitchers in MLB history, so maybe they could move him. Right-hander Zach Davies, 29, might be a fit for a contender that needs back-of-the-rotation depth. Right-hander Ian Kennedy would appeal to a team looking to add a solid middle reliever, and righty closer Mark Melancon could help a team like the Red Sox.

If they buy: They need offense! The Diamondbacks rank 14th in the NL in runs scored, ahead of only the Pirates. A middle-of-the-order impact bat could change their entire offense.


Could the Diamondbacks find a taker for Madison Bumgarner? (Kirby Lee/USA Today)

The Red Sox have fought their way back into the pennant race thanks to an offense that ranks second in the American League in runs scored. I don’t see a scenario in which they sell even though they sit in fourth place, 12 1/2 games back of the Yankees in the AL East. The Red Sox (32-29) have won nine of their last 11 games to move into the third AL wild-card spot. That said, if they collapse in June and July, they’d have a lot to sell.

If they buy: The Red Sox need a closer or back-end relief help and David Bednar of the Pirates, Joe Barlow of the Rangers or Scott Barlow of the Royals would be perfect fits. All three young righties are under team control for two or more additional seasons and it would take a significant prospect to land one, probably a future position player. The Red Sox also could upgrade in the outfield, so a reunion with Andrew Benintendi or a trade for Bryan Reynolds or Mitch Haniger (if he gets healthy) could make sense.

If they sell: Although a selloff is unlikely, trading shortstop Xander Bogaerts, designated hitter JD Martinez or right-hander Nathan Eovaldi (injured list) would bring back significant prospects. Bogaerts is expected to opt out of his contract after this season and become a free agent. Martinez and Eovaldi will be free agents.

The Guardians (29-27) are just three games back of the Twins in the AL Central and a half-game behind the Red Sox for the final AL wild-card spot, so they’ll likely be buyers at the trade deadline. The Guardians rank sixth in the AL with 260 runs scored, which is more than the Rays and Astros despite playing four fewer games. On the pitching side, the Guardians rank eighth in the league in team ERA (3.66), which shows they are well-balanced.

If they buy: In this scenario, making a move for an outfield bat or pitching depth would be their best play. The Guardians would match up well with the A’s in a deal for right-handed starting pitcher Frankie Montas, outfielder Ramón Laureano and/or righty reliever Dany Jiménez. Cleveland has a lot of prospect depth to deal from, and a blockbuster of this nature would give the Guardians a better shot at making the playoffs.

If they sell: Right-hander Zach Plesac (a solid middle-of-the-rotation starter), righty Bryan Shaw (a veteran reliever who led the majors in appearances last season) and catcher Austin Hedges (a strong defensive catcher who can’t hit but is a decent backup) are players Cleveland could move if they sell. Plesac (4.06 ERA in 65 career starts) is under team control through the 2025 season. Shaw is signed through this year with a 2023 club option. Hedges will be a free agent after this season.

The Rockies (27-34) are in last place in the NL West, 10 1/2 games behind the division-leading Dodgers and seven games out of the final NL wild-card spot. Unless they have a strong July, they’ll be selling at the deadline.

If they sell: The Rockies have relievers they could move, including right-handed closer Daniel Bard (2.13 ERA, has converted 13 of 15 save opportunities) and righty Alex Colomé (2.31 ERA in 24 appearances), who can set up or close. They could dangle outfielder Charlie Blackmon, a four-time All-Star who turns 36 in July, but would have to pay most of what’s left on his deal. (He holds an incentive-laden 2023 player option.) Blackmon has nine home runs, 31 RBIs and a .741 OPS. Shortstop José Iglesias, a strong defender who is surprisingly hitting .309, is another trade candidate. He will be a free agent after this season.

If they buy: The Rockies rank 27th in team ERA (5.02) and if they buy at the deadline, they should focus on pitching. It’s difficult for Colorado to get free-agent pitchers to sign because they have to pitch half of their games at Coors Field, so drafting or trading for arms is the best route. 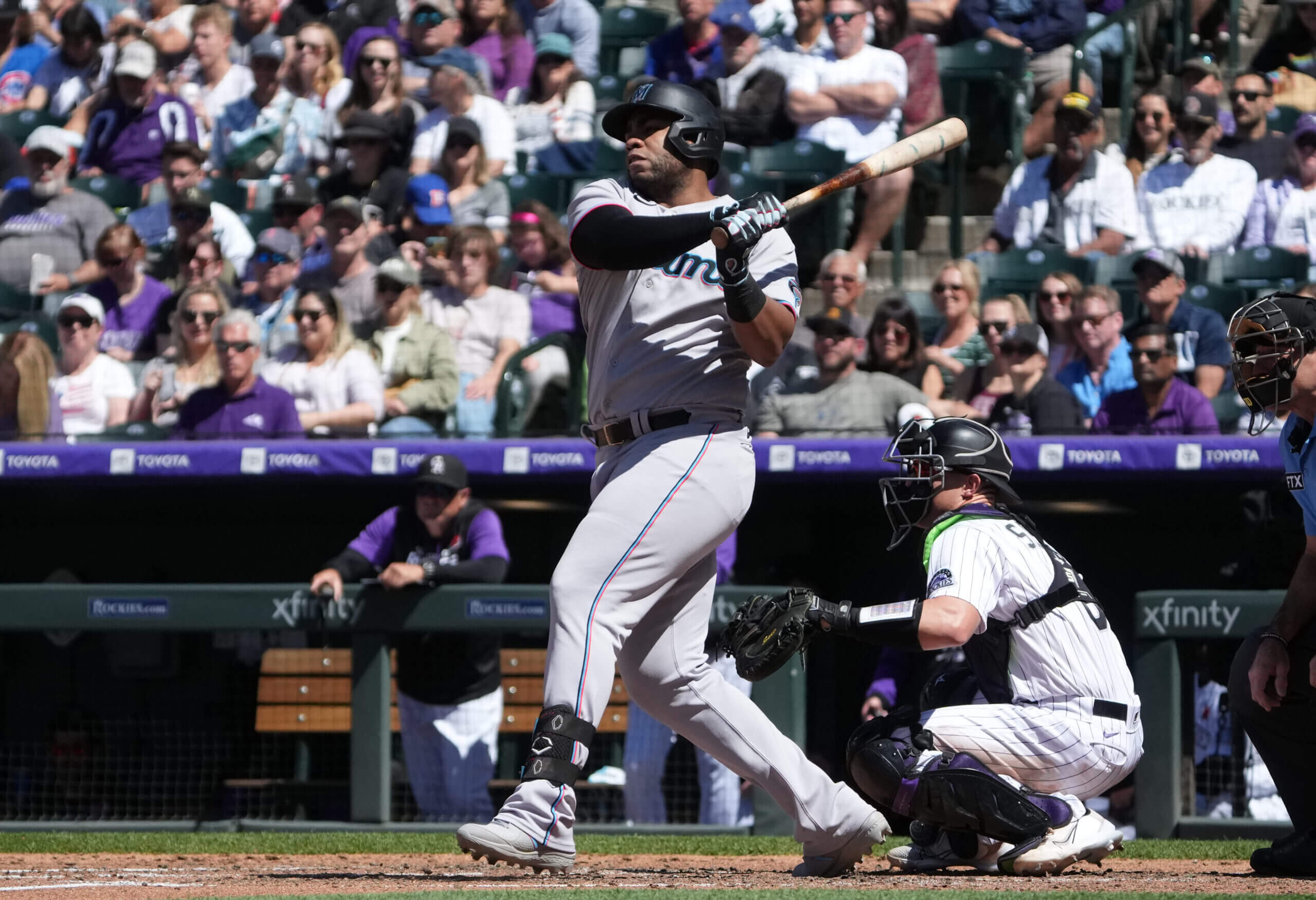 Jesús Aguilar will be a free agent after this season. (Ron Chenoy/USA Today)

The Marlins (27-31) are in fourth place, 11 games back in the NL East and 5 1/2 games out of a wild-card berth. They are on track to be sellers at the deadline and could end up moving veterans along with perhaps rookie or prospect pitchers to try to add more offense and defense.

If they sell: The veterans most likely to be dealt are first baseman Jesús Aguilar (.252/.307/.417 slash line, eight home runs, 27 RBIs) and shortstop Miguel Rojas, who would be better as a utility player than an everyday shortstop at this point. In terms of pitching, the Marlins could dangle right-handed starter Pablo López, who has one of the best changeups in the game (.152 batting average against) and a 2.30 ERA in 12 starts, and is under team control through 2024. Maybe they’d even move a rookie pitcher such as Edward Cabrera, a 24-year-old right-handed starter who can hit 103 mph and throws a 95 mph changeup. They certainly have trade chips that will intrigue contending and non-contending teams.

If they buy: The Marlins need a better all-around center fielder such as Reynolds, Benintendi or Cedric Mullins, who is my favorite option for them. They can’t buy their way into the playoffs, so they’ll have to try to trade themselves there instead, and that means moving veterans, rookies and prospects to get the players they need for the long term.

Firing Joe Girardi and hiring Rob Thomson as interim manager has revamped the Phillies and changed their trajectory. A team that looked like it could be sellers reeled off wins in Thomson’s first eight games and now seem entrenched as buyers if the players can maintain the momentum. The Phillies (30-30) are nine games back of the Mets in the NL East, but just 3 1/2 games out in the wild-card race.

If they buy: The Phillies need to improve their team defense and, as always, their bullpen. They should target all of the quality relievers on the market, including veterans such as Bard and Melancon, as well as the younger relievers like Bednar, Jiménez, Gregory Soto and Josh Staumont, among others. The Phillies must be open-minded about potentially dealing position players such as Alec Bohm (under team control through 2026) and Rhys Hoskins (through 2023) if they can upgrade a poor defense.

If they sell: Team president Dave Dombrowski is unlikely to go down this path, but if the Phillies did, they have a strong core and could deal from the top of their rotation or even key parts of their lineup. I can’t see that happening unless they implode, which is what they were doing before Girardi was fired.

President of baseball operations Jerry Dipoto typically walks a tightrope on buying or selling. Most times, he does both. He has one eye on today and the other on the future, and I see him following that same approach at this trade deadline. The Mariners (27-33) are 10 games back in the AL West and 4 1/2 games out of a wild-card berth.

If they sell: Haniger and second baseman Adam Frazier are interesting impending free agents and if the Mariners don’t play better, both could be dealt by the deadline. Haniger (right high-ankle sprain) hasn’t played since April 29, and he may not return until after the All-Star break. But if he is healthy and produces, he’s a power bat (39 homers and 100 RBIs last season) several contending teams will pursue. Frazier ranks fourth on the team in hits (54) but has slashed just .234/.304/.320 and will have to start playing better to offer much value at the deadline, though his versatility will appeal to most contending teams.

If they buy: The Mariners are basically middle of the pack in the AL in runs scored, but pitching has been their problem. They rank 11th in the AL in team ERA (4.07), and five of their eight most-used relievers have ERAs above 4.60. If they can deal Haniger and Fraizer to bolster their bullpen, they could still have a shot at the final AL wild-card berth.