A neat bourbon. A stogie to puff on. And Game 4 of the Eastern Conference final.

No doubt scores of hockey fans in the United States, Canada and across the globe enjoyed Tuesday night’s Tampa Bay Lightning-New York Rangers game with a cocktail and cigar in hand, but there are only so many who got to do so overlooking the Amalie Arena ice before, during and after the Lightning even the best-of-seven series with a 4-1 win.

In one of the most unique settings in any of the 32 National Hockey League arenas to view a game, the Lightning sport their very own private cigar club where Lightning fans and fans of other teams get the rare chance to enjoy a hockey game right in front of them while sitting on a leather couch or bar stool in front of a couple panes of glass on the suite level.

“I’ve been on the waiting list for three years, and it doesn’t get better than this,” 39-year-old Lightning season ticket holder Danny Ayala said as he blew out a puff of smoke. “I couldn’t be any happy. I’m in construction, and this is a great place to network.”

Tampa has long been known for its cigar culture thanks in large part to Ybor City five minutes from the arena. Vicente Martinez-Ybor immigrated from Cuba in the late 1880s and founded the cigar manufacturing community in Tampa. While many of the cigar factories are long gone, one that is still there is JC Newman. Founded in 1895 by Julius Caeser Newman, it’s the oldest family-owned cigar manufacturer in the US The club is run by JC Newman and called Diamond Crown Cigar Lounge after the Diamond Crown brand was unveiled in 1995 to celebrate JC Newman’s 100th anniversary.

Some of the guests who frequent the club and can grab a premium cigar from the lounge’s humidor include former NHL coach Jacques Lemaire, former wrestling star Hulk Hogan and many of the Tampa Bay Buccaneers coaches. Wells Fargo Center in Philadelphia also has a cigar club, but you can’t see the ice from inside. 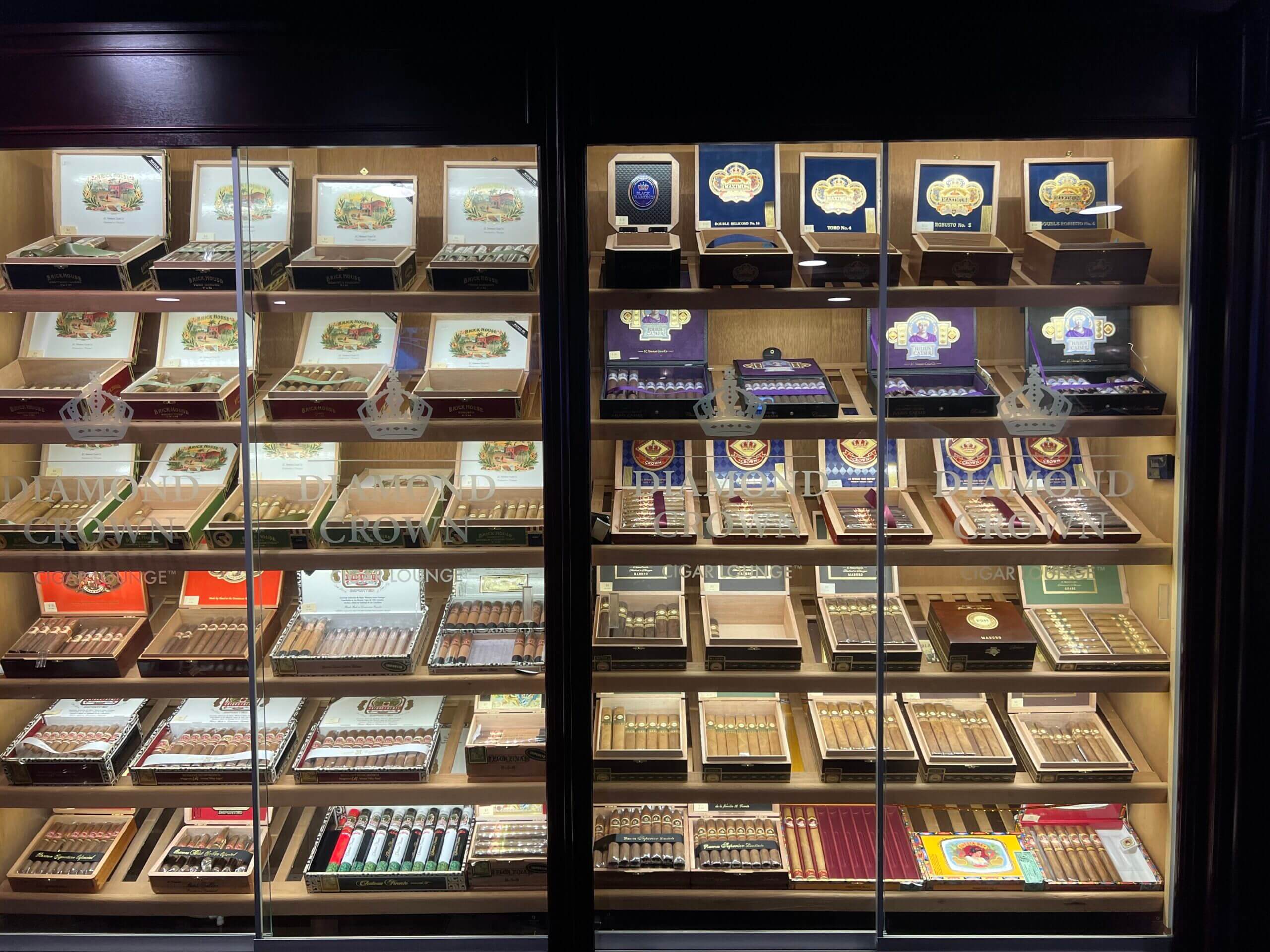 If you’re a member of the Lightning’s two-story Chase Club in one of the arena’s end zones, you’ve got access to the cigar lounge, a bourbon bar, top-shelf wine and scores of carving stations for some scrumptious pregame grub .

But access to the Chase Club can come via Ticketmaster, as well, for outsiders, too.

They handle any non-police-related emergencies, meaning fire, extrication, towing, hazardous materials and medical emergencies between the New Jersey Turnpike and 8th Ave. between 36th and 42n/a Streets in Manhattan, plus inside the tunnel. 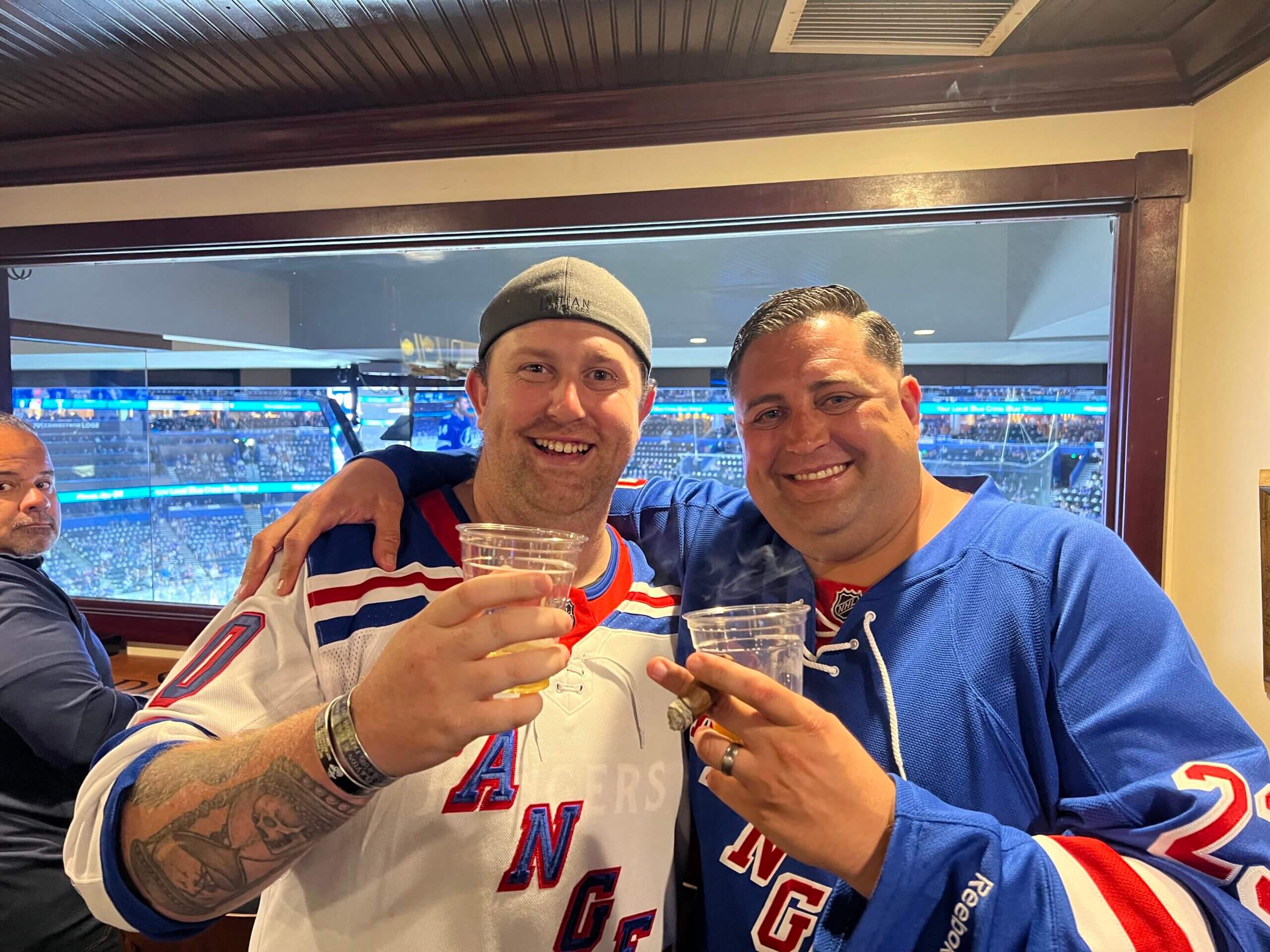 At 8 o’clock Monday night, Pearl went online and discovered the Chase Club tickets. For $1500, including fees, he bought the tickets, which included access to the cigar lounge. Schuyler handled the flights and hotels.

“How could we miss this?” Pearl asked as he took a puff of his Arturo Fuente. “And everybody in here is so nice.”

“Jeremy asked if I had tickets, so I said, ‘Come on down,’” Jerger said as he took a puff of the last of his JC Newman’s Robusto. 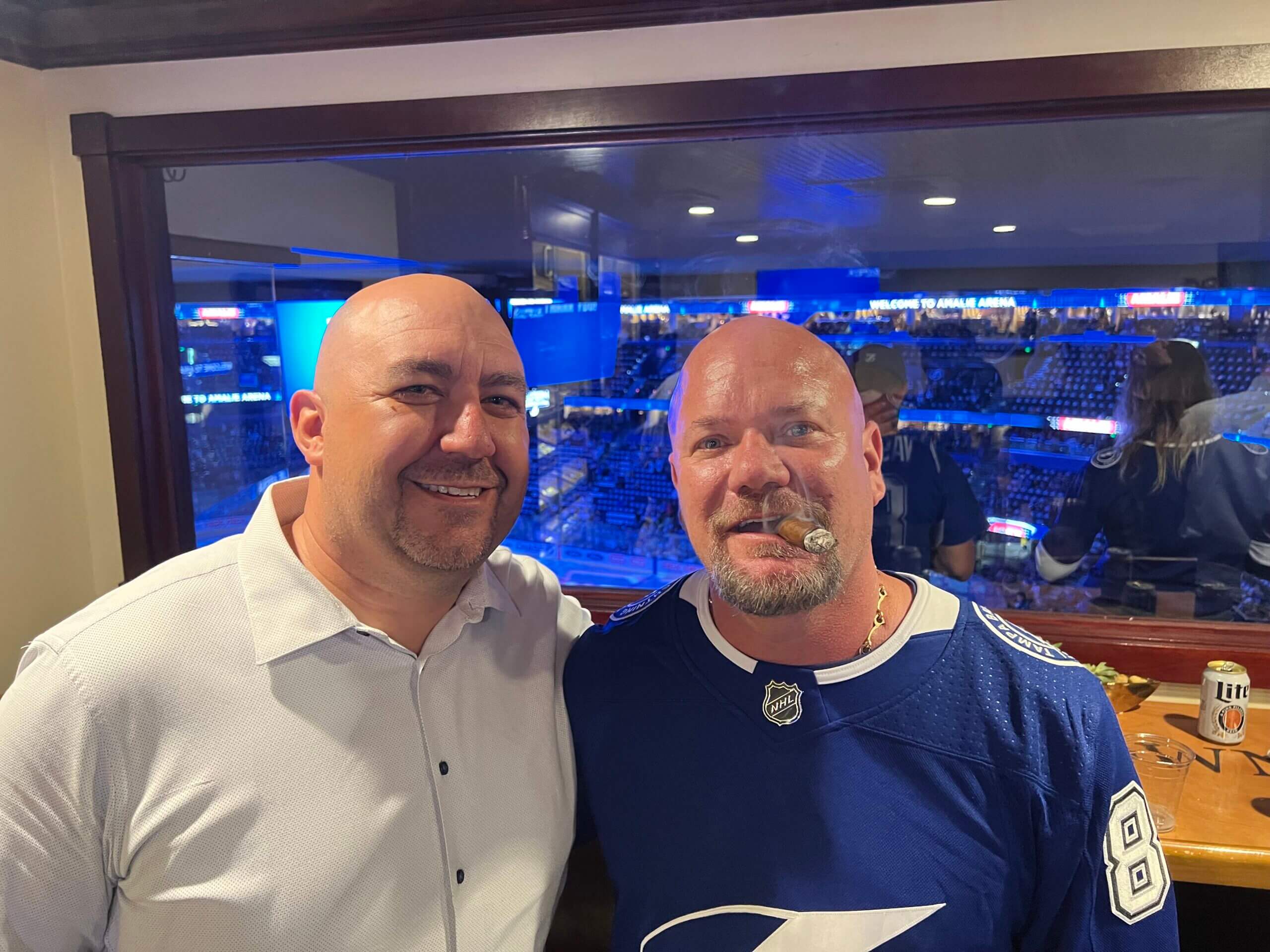 When Krumwieder’s boss’ boss, George deMenocal, found out, the Rangers fanatic was on the next flight to Tampa from his home in New Canaan, Conn.

“This is the best thing I’ve done in years,” deMenocal said. “Honestly. Nobody would be this inviting to another team’s fan, but this is a blast. The energy in here is great, the camaraderie, the fun to hang out with these guys and smoke a cigar. Let’s just say, if New York would host this, it probably would not be as welcoming.”

Jerger, who has smoked his fair share of Cohiba and Romeo y Julieta cigars and loves the Davidoffs and JC Newman selections he can get at Lightning games, has a wine and cigar room in his house that he watches Lightning road games from, “but I ‘d rather be here watching a live game any day of the week,’ he said. “There’s just something about JC Newman. They’ve been around 125 years and the machines they have at their factory are 100 years old. They still have artisans to work the machines, and these machines are so old and so fragile and these guys still know how to work on them to this day. To watch them work is amazing.” 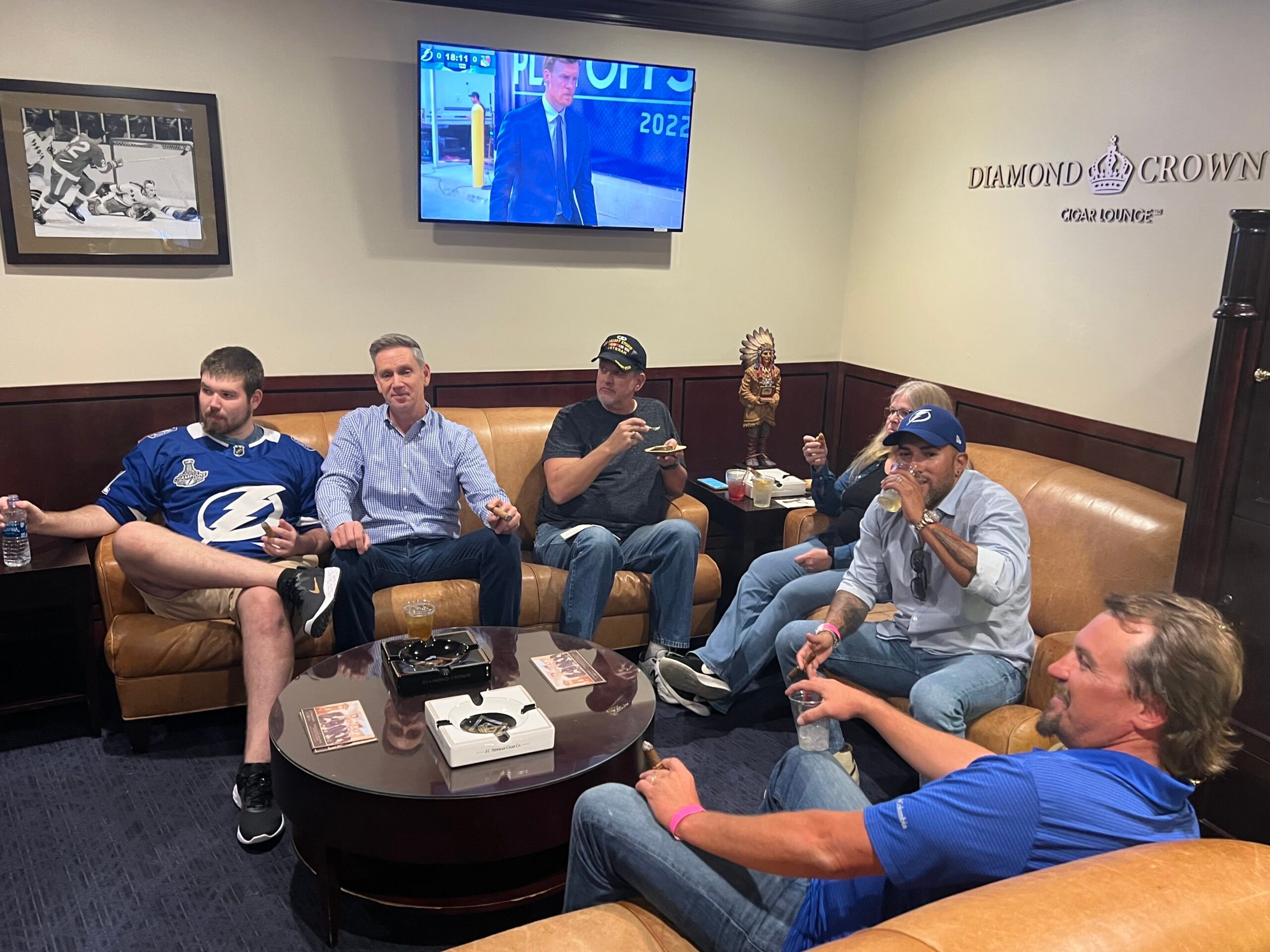 The Chase Club is just one of the many cool areas of Amalie Arena that make watching Lightning games fun.

Years ago, when the previously named Ice Palace was built, it was nice but hardly a palace. There were few frills. Downtown Tampa near the arena was also a ghost town.

There was the arena, a hotel, the convention center and the port. There were very few places to eat and things to do. They built Channelside along the water, but there were few views of the actual water, which was peculiar, and in a few years many of the stores and restaurants were vacant.

But Jeffrey Vinik bought the Lightning in 2010 and in the past 12 years has worked to completely revitalize downtown and the arena.

Channelside got a huge makeover and is now called Sparkman Wharf, which is full of restaurants and stores and completely open to the waterfront with a beer garden, dining garden and live event venue. There are restaurants all over the place now, there are major hotels (including the brand spanking new JW Marriott), and Amalie Arena has become one of the top venues in all of sports.

The Lightning have 15,500 season ticket holders, a long waiting list and it’s obvious sponsorships are strong. They’ve sold out more than 280 consecutive games.

The Lightning have won 10 straight playoff series, including two Stanley Cups, but even if the team has a downturn that all teams inevitably go through, it’s hard to imagine the Lightning falling off the map since coming to a game and downtown Tampa has become such an event.

“We’ve put a lot of hard work in at this place, not only to make the team phenomenal, but we’ve created a really strong Lightning fan base that love coming to games,” said Lightning president and CEO Steve Griggs, who helped start the Minnesota Wild and came to the Lightning from the Orlando Magic in 2010. “The brand itself has been transformed. I think you see it in our game presentation and everything we’ve done in the community.

“But our fan and guest experience is one of the best in the industry.”

“Vinik has made this area what it is today,” Jerger said. “It was nothing like what it is today when he came in and bought the team and revitalized the whole area. They’ve made Lightning games a must-attend event and Tampa a destination city.”

It sure was for Schuyler and Pearl, who spent a boatload of money to fly to Tampa.

But they still had a blast and still believe in their team despite Tuesday’s defeat.

“I knew they had something special earlier this season when their special teams were clicking,” Schuyler said.

“The last 15 years, at least, our power play has sucked,” Pearl said.

“But they added (Andrew) Copp, (Frank) Vatrano, (Tyler) Motte and (Justin) Braun at the trade deadline, and they’ve been huge,” Schuyler said. “I’m telling ya, we’ve got a shot. We might go to a parade this year, and it’s been 28 years since I’ve been to a parade. … We’ll be in Colorado next week.”